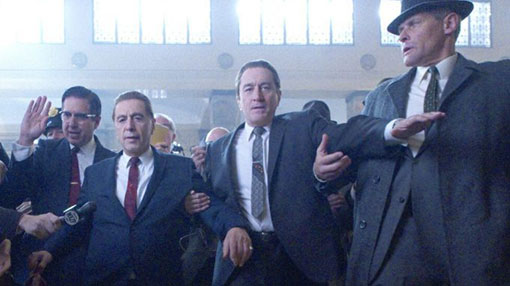 After debuting a first look at Martin Scorsese’s “The Irishman” earlier this week, Netflix has unveiled the sprawling teaser trailer for the highly anticipated gangster epic. “The Irishman,” based on Charles Brandt’s book “I Heard You Paint Houses,” reunites Scorsese with his former muse Robert De Niro and his “Goodfellas” Oscar winner Joe Pesci. The gangster movie also stars Al Pacino, who has never worked with Scorsese until now.

“The Irishman” stars De Niro as Frank Sheeran, a World War II veteran who became a mob hitman and played a role in Jimmy Hoffa’s disappearance. Pacino is starring as notorious mob-connected union boss Hoffa. The supporting cast includes Harvey Keitel, Ray Romano, and Anna Paquin. All the major players are featured at some point in the teaser trailer, which spans decades as it tells Sheeran’s life story in the mob.

One of the biggest stories around “The Irishman” is the visual effects Scorsese used to de-age his actors. De Niro, for instance, is playing Sheeran at multiple different ages thanks to the VFX technology that helps the actor appear decades younger. The teaser trailer ends with a look at a younger De Niro, although the director is surely still perfecting the special effects ahead of the movie’s fall release.

“The Irishman” is set to world premiere as the opening night selection at the 2019 New York Film Festival. The gangster movie is Scorsese’s second Netflix release of the year following his Bob Dylan documentary “Rolling Thunder Revue,” which opened this summer. “The Irishman” is one of Netflix’s major Oscar hopefuls this awards season along with Noah Baumbach’s “Marriage Story.” Producer Jane Rosenthal previously teased the film finds Scorsese back in “Goodfellas” mode.

“There will be some sort of theatrical component,” Rosenthal said of the movie. “You have to have that. It’s a different experience than watching it at home. In a theater, you may start to laugh at something because the people next to you are laughing — and ‘The Irishman’ is very funny, much like ‘Goodfellas’ was funny.

Netflix will release “The Irishman” in select theaters and on its streaming platform this fall. Watch the first official trailer for the drama below.