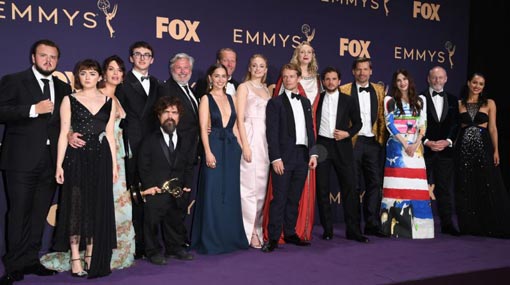 Amazon’s “Fleabag” stole the show Sunday at the 71st Primetime Emmy Awards, bringing home four awards, including those for best actress in a comedy, directing and best comedy series.

The show, which centers around a dry-witted, grief-riddled and promiscuous British woman living in London, earned writer and star Phoebe Waller-Bridge the outstanding writing award. However, it was her win for the lead actress that was unexpected.

Many had anticipated the award would either go to Rachel Brosnahan from “The Marvelous Mrs. Maisel” or to Julia Louis-Dreyfus from “Veep.” Had Louis-Dreyfus taken home the prize she would have had the most wins of any performer in the history of the Emmys. She currently is tied for this honor with Cloris Leachman. Both actresses have eight Emmys for their acting performances.

One of the biggest questions of the night was how many trophies “Game of Thrones” would bring home. Heading into the ceremony the HBO show had 32 nominations for long-running drama. The show earned 10 Emmys during the Creative Emmy Awards ceremony earlier in the month and tacked on another two during the broadcast.

Peter Dinklage won for best supporting actor for his portrayal of Tyrion Lannister and the show won the outstanding drama prize.

In the category for limited series and TV movies, “Chernobyl,” “A Very English Scandal,” “When They See Us” and “The Act” took home awards.

Notably, Jharrel Jerome won the Emmy for lead actor for his performance in Netflix’s “When They See Us,” a limited series about the Central Park Five.

When accepting the award Jerome said, “This is for the men that we know as the Exonerated Five.”

Kevin Richardson, Antron McCray, Raymond Santana, Korey Wise, and Yusef Salaam, the five men who were convicted and later exonerated for the 1989 assault and rape of a female jogger in Central Park, were in the crowd when Jerome won.

Throughout the night, a number of speeches were peppered with calls to action. During Patricia Arquette’s acceptance speech for best supporting actress in a limited series or TV movie, the actress spoke about the death of her sister Alexis and about rights for transgender people.

“I’m in mourning, Alexis, and I will be the rest of my life for you until we change the world, until trans people are not persecuted,” Arquette said. “And give them jobs. They’re human beings, let’s give them jobs. Let’s get rid of this bias that we have everywhere.”

Additionally, Michelle Williams, who won the award for lead actress in a limited series or TV movie, used her acceptance speech to discuss the gender pay gap in Hollywood.

“I want to say thank you so much to FX and to Fox 21 Studios for supporting me completely and for paying me equally, because they understood that when you put value into a person, it empowers that person to get in touch with their own inherent value, and then where do they put that value? They put it into their work,” she said.

Williams added, “And so the next time a woman — and especially a woman of color, because she stands to make 52 cents on the dollar compared to her white, male counterpart — tells you what she needs in order to do her job, listen to her. Believe her. Because one day she might stand in front of you and say thank you for allowing her to succeed because of her workplace environment and not in spite of it.”

And the winners are...

Other notable wins throughout the night were “Chernobyl,” which took home the prize for outstanding limited series, as well as “Saturday Night Live” and “Last Week Tonight with John Oliver,” which each won two awards in the variety category.

Like the Academy Awards ceremony earlier this year, the Emmys did not have a host. Instead, Fox invited pop star Halsey, known for her songs “Now or Never” and “Bad at Love,” to perform the tribute for the In Memoriam segment.

In addition, comedian Adam DeVine, whose credits include “Workaholics,” introduced the variety genre with a special performance, and Thomas Lennon, of “The State” and “Reno 911,” provided commentary during the ceremony for audiences at home.

Here are the winners of the 71st Primetime Emmy Awards: