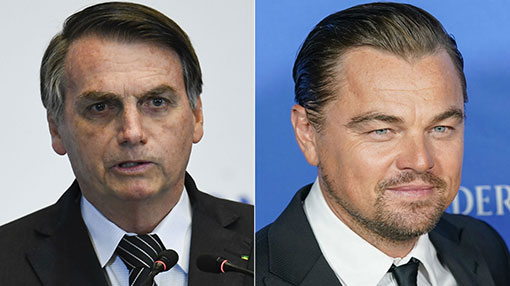 (CNN) – Brazil’s President blamed an unusual candidate this week as a cause of the Amazon forest fires: actor and environmentalist Leonardo DiCaprio.

President Jair Bolsonaro made the claim Thursday on a webcast, arguing that nongovernmental organizations (NGOs) contributed to the forest fires that ravaged the Amazon rainforest earlier this year.

“The NGO people, what did they do? What’s easier? Set fire to the bush,” he said, providing no evidence to support the accusation. Amazon deforestation rate hits highest level in over a decade. He continued, “Take photo, film, send it to an NGO, the NGO spreads it out, does a campaign against Brazil, gets in touch with Leonardo DiCaprio and Leonardo DiCaprio donates $500,000 to this NGO. One part went to the people who were setting the fire, right?”Leonardo DiCaprio, you are assisting with the burning of the Amazon, that can’t be,” Bolsonaro said.

The Brazilian president doubled down on his claims Friday, talking to supporters outside the Presidential Palace in Brasília.”Leonardo DiCaprio is a great guy, isn’t he? Donating money to set the Amazon on fire,” he said.DiCaprio responded to the claims Saturday on Instagram, refuting Bolsonaro’s accusations while maintaining his support to the Brazilian people working to save the forest.

“The future of these irreplaceable ecosystems is at stake and I am proud to stand with the groups protecting them,” he wrote. “While worthy of support, we did not fund the organizations targeted.”

Global Wildlife Conservation and IUCN Species Survival Commission are two of the largest environmental groups working in the Amazon. Both organizations released statements condemning Bolsonaro’s accusations, though neither mentioned him by name.

The GWC said it remains concerned with the destruction of the Brazilian Amazon and reaffirmed its stance alongside those protecting it.

“The Amazon rainforest is in crisis. Brazil has historically made impressive progress towards protecting its unique ecosystemsm,” GWC’s statement read.

“However, we are alarmed by recent events that seek to undermine this progress. In the past few days, false accusations have been made to undermine environmental defenders and distract the general public from policies that directly lead to environmental disasters like those across the Amazon earlier this year.”

The IUCN similarly affirmed their support to those protecting the forest, while expressing concern toward the recent comments.

“As an umbrella organization committed to biodiversity conservation, we are concerned that there are increasing and targeted attacks on people and groups working to protect nature in the Amazon,” its statement read.

“Environmental defenders, whether in local communities, NGOs, or government agencies, should be afforded with the highest protection of the law in Brazil.”

Bolsonaro has made similar claims before

This isn’t the first time Bolsonaro has pointed fingers at NGOs for the Amazon forest fires. In August, when international criticism of the fires was at its peak, he accused environmental groups of setting fires in the Amazon.

Those accusations came despite arguments from groups like Amnesty International, which attributed the fires to Bolsonaro and his policies that have led to increased land-clearing in the rainforest by loggers and ranchers.