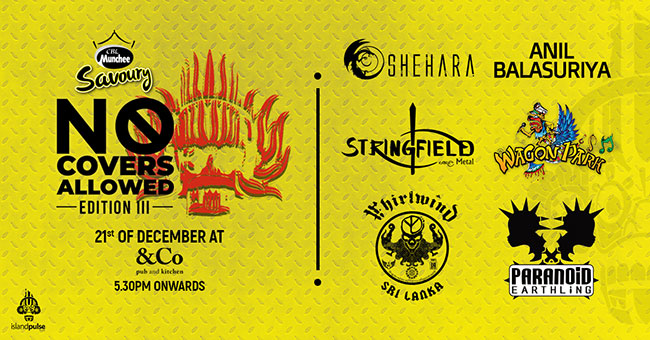 Munchee Savoury No Covers Allowed Revs Up for Edition III

A night of revelry and music bring the musical communities together at The Steuart & Co. Pub and Kitchen every other month and is set to bring them together once again on the 21st December 2019 over an evening of happy hour deals, talent and camaraderie.

No Covers Allowed prides itself on the talent and prestige every assemblage dominates in their distinctive genres. From its inception, the roaring line-up that compliments the NCA experience has now become the epitome of rock and metal amongst youth in Sri Lanka.

This December, No Covers Allowed will feature a mind-blowing host of artists including Sri Lanka’s first female rock/metal solo artist, Shehara. Appearing in the music scene circa 2011 after becoming a finalist at TNL Onstage, she hones her skill with a provocative sound and edgy new album.

Original music as beloved as it may be amongst the community now, wasn’t the case not too long ago. Rumoured to be Sri Lanka’s rock culture pioneers, “Independent Square” was a five-person alternative rock band composed by Anil Balasuriya in 1997 that later went on to win the first ever TNL onstage in 1999: Anil sets up to electrify the crowd with new and nostalgic beats.

Up and coming Sinhalese, hard rock band Stringfield use their platform to shine light on social issues and struggles while staying true to the essence of Sri Lankan rock culture since 2017.

A genre for every mood of the night, Wagon Park revolutionized the entertainment industry kicking it old school with the Blues and Rock & Roll repertoire, collecting accolades since 2007 and the recent release of their album, “Stoned”.

Redefining culture and breaking stereotypes make No Covers Allowed a platform that welcomes everyone who revels in challenging the norm. Whirlwind started as a 90’s teenage metal band born in an era of darkness, using their lyrics to spread a message of unity and rebellion to create sub-cultures within the industry.

Transformation and evolution against the odds, rising from royal roots, Paranoid Earthlings began their rock & roll journey to fame in 2001. Touring locally and internationally throughout their career, they book their next stop centre stage with No Covers Allowed: Edition III.

All this and more, catch us as we bid farewell to the decade in a grunge mosh pit fuelled by adrenaline and head banging adulation on the 21st of December 2019 at Steuart & Co. Pub and Kitchen.