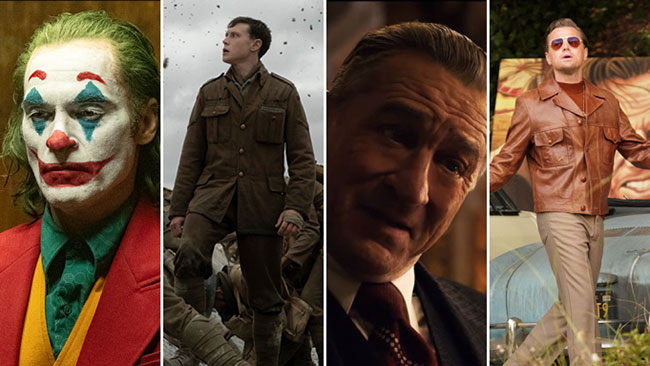 Female filmmakers were shut out, “Parasite” made history and “Joker” edged out “The Irishman,” “1917” and “Once Upon a Time ... in Hollywood” in Monday’s Oscar nominations.

“Joker,” which gives the DC Comics villain an antihero spin cribbed from Scorsese, was expected to do well. But the academy’s overwhelming support for a divisive movie that was far from a critical favorite was unexpected. Its nominations included best actor for Joaquin Phoenix and best director for Phillips.

Though a record 62 women (or about a third of nominees) were nominated Monday, the academy put the most weight behind a handful of swaggering male-driven and man-made movies predicated on virtuosity, spectacle and star power. For the 87th time, the academy selected all-male directing nominees.

Hollywood, in the midst of a streaming upheaval, also gave Netflix more nominations than ever before: 24. The 10 nominations for “The Irishman” tied the most for a Netflix film, following “Roma” last year. Scorsese, a one-time winner for “The Departed,” was nominated for best director for the ninth time. The film also won nods for Al Pacino, Joe Pesci and its de-aging special effects. “We put all of ourselves into this picture,” said Scorsese in a statement.

“1917” followed up its Golden Globes win and strong opening weekend at the box office with nominations not just for its technical achievement (including Mendes’ directing and Roger Deakins’ cinematography) but for best screenplay, too.

“Once Upon a Time ... in Hollywood” was nominated in just about every category it was expected to, including Tarantino for directing and screenplay, best actor for Leonardo DiCaprio and best supporting actor for Brad Pitt. And Hollywood loves little more than a good story about itself.

“It’s a real love story to this industry,” DiCaprio said by phone. “In this movie, Quentin got to do a movie that was a homage to Los Angeles and a place that I grew up in.”

Despite a year in which women made historic gains behind the camera, female directors were again shut out of best director. The most likely candidate was Greta Gerwig (“Little Women”), who was the last woman nominated, two years ago for “Lady Bird.”

“Congratulations to those men,” said Issa Rae, who presented the nominees alongside John Cho.

Rebecca Goldman, chief operating officer for Time’s Up said of the lack of women nominated for directing: “This is why Time’s Up exists — to ensure women in entertainment and across industries get the opportunities and recognition they deserve.”

There were many surprises. Awkwafina, who was poised to become just the second Asian American nominated for best actress (the first, 1936 nominee Merle Oberon, hid her South Asian heritage), wasn’t nominated for her acclaimed leading performance in “The Farewell.” Also overlooked for best animated film was “Frozen 2,” the highest grossing animated film ever; Beyoncé, for her “Lion King” song; and the hit documentary “Apollo 11.”

Most glaringly, Jennifer Lopez, long considered a supporting actress front-runner for her performance in “Hustlers,” was also denied her first Oscar nomination.

Those oversights left the Oscars with their least diverse field since the fallout of #OscarsSoWhite pushed the film academy to diversify its membership. The only actor of color nominated was Cynthia Erivo, the British actress, for her Harriet Tubman in “Harriet.” (Erivo was also nominated for best song.) Last week, the British film academy nominated only white performers, leading Erivo to decline an invitation to perform.

No filmmaking couple has had an Oscar nominations morning quite like Gerwig and “Marriage Story” director Noah Baumbach. Their movies were each nominated for best picture, best screenplay (adapted for Gerwig; original for Baumbach) and six nominations in total.

“Little Women” producer Amy Pascal, the former Sony Pictures chief, said she would celebrate with Gerwig and Baumbach at dinner Monday evening. On Gerwig’s lack of directing nod, Pascal said: “I wish it were otherwise. But we’re so proud this morning.”