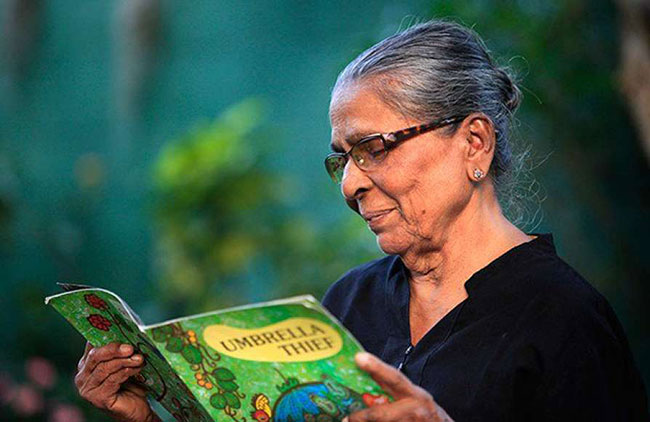 Veteran author and illustrator of children’s books Sybil Wettasinghe, fondly known as ‘Sybil Nanda’ in Sri Lanka, has passed away at the age of 93.

According to family sources, she had been receiving medical treatment at a private hospital in Colombo for the past 4 days and had passed away at around 11.00 p.m. last night (30).

Kala Keerthi Sybil Wettasinghe, the doyen of children’s literature in Sri Lanka, has been writing and illustrating stories for over 70 years.

The internationally-known children’s story writer and illustrator had entered into Guinness Book of World Records in March this year for a book with the most number of alternate endings.

The 93-year-old grandmother of five, who has shaped the imagination of four generations, threw a challenge to her young readers to write an end to her story titled Wonder Crystal using their creativity.

A total of 20,000 endings were received, and 1200 best entries were featured in a printed version to coincide with the World’s Children’s Day.

Sybil, who was the first Sri Lankan woman to work full-time as a journalist, has published about 200 children’s storybooks, some of which have been translated into languages like Tamil, Danish, Japanese, Chinese, Swedish, Dutch, Vietnamese and Norwegian.

It all began with Kuda Hora (Umbrella Thief), a narrative she developed for the popular Sinhala eveninger Janata in 1952. Later the story was published as a book laying the foundation for her prolific career.

Her tales rooted in Sri Lankan simple village life has also cornered a sizeable market in the US by becoming the first Asian children story writer to be published in America.

In 1992 Japan honoured Sybil with a prestigious award to recognize her services. Kuda Hora was published in Japan in 1986. Another series of books about a humorous, crafty jackal, Hoity the Fox has become a sensation in Japan. Kuda Hora was honoured with the Best Foreign Book Award in Japan in 1986, and in 1987 it won the Japanese Library Association Award for the most popular children’s book.

She began her career at Lankadeepa published by Times of Ceylon Group and later joined the Lake House and wrote stories and drew illustrations for Sinhala and English newspapers.