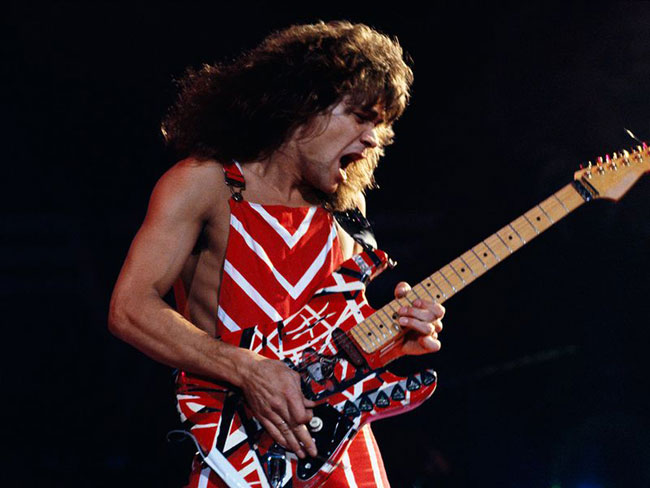 Eddie Van Halen, the renowned lead guitarist of iconic rock group Van Halen, has died, according to a social media post by his son. He was 65.

“He was the best father I could ever ask for,” his son, Wolf Van Halen, wrote in a note posted to Twitter. “Every moment I’ve shared with him on and off stage was a gift.”

Wolf Van Halen, Eddie and Valerie Bertinelli’s son, said his father died after a “long and arduous battle with cancer” on Tuesday morning. Van Halen went on to marry actress Janie Liszewski in 2009.

“My heart is broken and I don’t think I’ll ever fully recover from this loss,” he added.

Bertinelli wrote on Twitter that her life changed 40 years ago when she met the guitarist.

“You gave me the one true light in my life, our son, Wolfgang,” the actress wrote. “Through all your challenging treatments for lung cancer, you kept your gorgeous spirit and that impish grin.

“I’m so grateful Wolfie and I were able to hold you in your last moments. I will see you in our next life my love.”

Eddie Van Halen, whose full name was Edward Lodewijk Van Halen, and his brother Alex Van Halen began performing together as teens, but formed the core of what would later become Van Halen after meeting David Lee Roth.

Over four decades, Van Halen released more than a dozen albums together.

Van Halen’s guitar wizardry anchored the band through four turbulent decades of platinum albums, sold-out tours and a revolving door of lead singers, from Roth to Sammy Hagar to Gary Cherone and back to Hagar and Roth again.

His solos crackled like lightning and powered all the band’s signature songs: “Runnin’ With the Devil,” “Panama,” “Hot For Teacher,” “Why Can’t This Be Love?” and of course “Jump” -- their only No. 1 hit -- which topped the pop singles charts in 1984.

Van Halen also famously lent his guitar chops to Michael Jackson for “Beat It,” the smash 1983 hit from the landmark “Thriller” album that melded Jackson’s silky pop with a harder rock edge.

Speaking to CNN in 2017 after making a charitable contribution to help raise money for school music programs, the Rock & Roll Hall of Famer noted the role music has played in his story.

“My whole life has been music,” he told CNN’s John Vause. “I could not imagine anything else.”

In a tribute for Rolling Stone’s 100 Greatest Guitarists, Van Halen, who was No. 8, wrote that Eric Clapton (No. 2) was “basically the only guitar player who influenced me -- even though I don’t sound like him.”

He added: “... what inspired me, what made me pick up a guitar, was his early stuff. I could play some of those solos now -- they’re permanently imprinted in my brain. That blues-based sound is still the core of modern rock guitar.”

As news of Van Halen’s death broke, his friends and fellow musicians paid tribute to the one-of-a-kind talent. Hagar wrote on Twitter that he was left “heartbroken and speechless.”

Gene Simmons of KISS wrote on Twitter: “Eddie was not only a Guitar God, but a genuinely beautiful soul.”

Geezer Butler of Black Sabbath called Van Halen “one of the nicest, down to Earth men I have ever met and toured with.”

“A true gent and true genius,” he wrote on Twitter.

On Facebook, Ted Nugent said: “Thank you Eddie for vitalizing enriching and stimulating our lives with your brilliance gifts and vision. Jam on my friend. Jam on.”