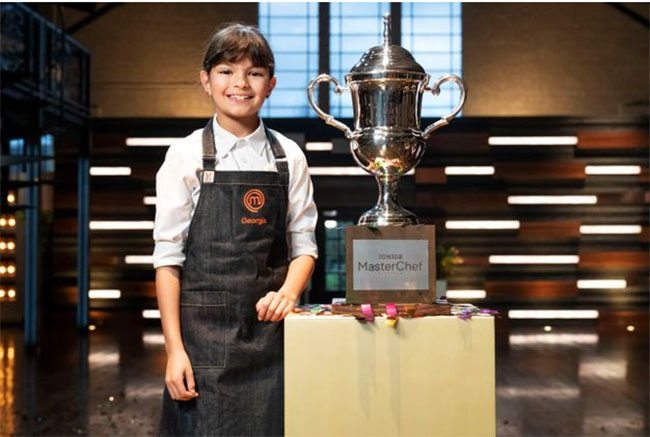 The tiniest contestant has taken out the biggest prize! Georgia, an 11-year-old dynamo with a passion for her grandma’s Sri Lankan curries, has been crowned the winner of Junior MasterChef Australia 2020. She takes home the trophy, the title and $25,000.

Can we get an invite to the next curry night, please Georgia? 🍛🤩 #JrMasterChefAU #MasterChefAU pic.twitter.com/VyeNNI9L7a

Georgia and the other finalists were really tested in these last few eps. In Sunday’s semi-final pressure test, for example, the kids were tasked with recreating a lemon meringue coronavirus.

The kids had a little over two hours to make this complex dessert from the celebrated pastry chef Kirsten Tibballs. They expressed their excitement with cute (and very 2020) phrases like “I’m terrified”, “I have never been any more stressed” and “this is the face of despair”.

“It will be, without a shadow of a doubt, the toughest thing you have ever cooked in your lives,” Mel said, reassuringly.

But Georgia wasn’t the only one getting baptised in the fountain of existential dread!

Carter had a horror cook. He lost so much time at the beginning; he forgot to put the butter in his cake batter; and at one point he broke down in tears, gasping for air, while manically weighing some lemon juice.

It was a genuinely horrifying few minutes of primetime TV and probably the closest this sweet show has ever come to The Hunger Games.

Things were even harder on Monday night. The pressure was on, and the stage was set – literally, because Network Ten had hired an orchestra to play tense music while the kids competed.

It was made more intense by the fact their mums were there! This meant the kids suffered a fair bit of backseat cooking and some light parental humiliation on national TV.

The final challenge was all about being “as fancy as possible”: each contestant had to produce a two-course meal for four people. The dishes (a main and dessert) could be anything; they just had to have a “fine dining” vibe.

In past seasons of MasterChef, many contestants have assumed “fine dining” meant “French” or, in the broadest terms, “rich white people food”. But these sweeties are too pure for that. They’re so proud of their heritage, and they know their cultures are fine as hell!

Georgia made THREE Sri Lankan curries. Filo served up some fried shrimp and Egyptian spicy rice. And Carter, the token white, made a complex variation of lamb and peas.

He followed it up with vanilla bean panna cotta, raspberry sorbet and chocolate soil. Filo made a hazelnut cake with mirror glaze, crumble and strawberry sorbet. And Georgia decided on a toasted coconut ice cream slice with Davidson plum meringues and pearls.

“It’s a blend between Sri Lankan and Australian – a bit like me!” she said, exploding my ovaries.

The boys did so well. The only marks down for Carter were small textural issues in a puree and the panna cotta. The only mark down for Filo was that his dessert could have used a salty element.

Georgia actually had the toughest time. Though her curries were the standout in the main course, her dessert literally fell apart. The base split, the ice cream didn’t set properly. She started to lose it. Her mum yelled out, “You can do it, my angel,” and she replied, heartbroken, “No I can’t.”

“I always try to get everything right but that’s not how life works,” Georgia said. After a hug from her mum, she managed to get the final elements on the plate. And it’s a good thing she did.

“I don’t care what it looks like,” Andy said after tasting. “Your child is a genius,” Mel added, essentially sealing the win.

The judges said the decision came down to “pure deliciousness”. Georgia just couldn’t be beaten.