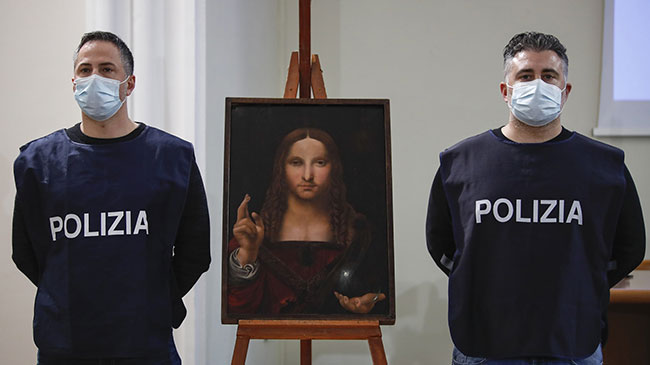 A 16th-century copy of Leonardo da Vinci’s “Salvator Mundi,” the world’s most expensive painting, has been recovered by Italian police after it was stolen from a museum in Naples.

The artwork, which was likely painted by one of the Renaissance master’s students, was discovered at an apartment during a search in the Italian city, according to a police statement. The property’s 36-year-old owner was found nearby and taken into custody on suspicion of receiving stolen goods.

The portrait was modeled on Leonardo’s famed depiction of Christ with one hand raised in blessing and the other holding a crystal orb. Numerous copies of the work were made during the artist’s lifetime by his students and assistants.

Although it is not known who created this particular “Salvator Mundi,” it is thought to have been painted towards the end of the 1510s by someone from the artist’s workshop. The portrait’s owner, the Museum of San Domenico Maggiore in Naples, said on its website that there are “several hypotheses” about the painter’s identity, with the “most convincing” theory crediting Leonardo’s student Girolamo Alibrandi.

It is believed that the painting was created in Rome before being brought to Naples by Giovanni Antonio Muscettola, an envoy and advisor to the Holy Roman Emperor, Charles V.

The artwork briefly returned to the Italian capital in 2019, when it was loaned to the Villa Farnesina for its exhibition “Leonardo in Rome.” The exhibition brochure described it as a “magnificent” copy of the artist’s masterpiece. The San Domenico Maggiore’s online listing meanwhile described the work as a “refined” and “well preserved” pictorial draft.

Police did not specify when the painting had been stolen, though the Naples museum reported being in possession of the work as recently as January 2020, when it was returned from Rome.

While some scholars have disputed the attribution to Leonardo, suggesting it was at least partly created by members of his workshop, the painting was restored and authenticated before becoming the most expensive artwork ever to sell at auction. It is widely thought that the record-breaking bid was made on behalf of Saudi Arabia’s Crown Prince Mohammed Bin Salman.

The “Salvator Mundi” has not, however, been seen in public since the November 2017 sale. After the Louvre Abu Dhabi announced that it would show the painting, it postponed the grand unveiling in 2018 without explanation.