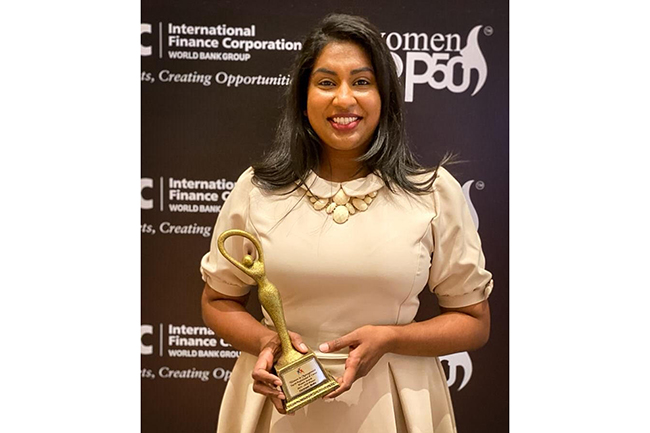 General Manager and Head of English News at Ada Derana 24, Indeewari Amuwatte has been recognized with the award for Inspirational Woman of the Year in Electronic Media, during the ‘Top 50’ Professional and Career Women Awards, 2020.

Presented by Women in Management, in collaboration with ‘Women in Work’, International Finance Corporation (IFC), a member of the world bank group and the Government of Australia, ‘Top 50’ Professional and Career Women Awards 2020 demonstrates the significant role women play in bringing about transformational change as employees, entrepreneurs, and leaders.

Ada Derana’s Indeewari Amuwatte was honoured with the Gold Award for Inspirational Woman of The Year in Electronic Media, for her inspirational body of work via platforms of electronic media.

Amuwatte, the General Manager and Head of English News for Ada Derana 24, who has been recognized for her work both locally and internationally, hosts Ada Derana’s marque talk show ‘At Hyde Park’, which was named among Asia’s top talks shows at the 2020 Asian Television Awards.

She has reported on terrorism and its impact on Sri Lankan society, during the height of the country’s civil war and covered a myriad of stories from politics to poverty, disaster to development and diversity and extremism.

She has spoken to people of all walks of life, both locally and internationally – from the ordinary man to opinion leaders, academics and politicians, business leaders and heads of state, diplomats and violent extremists and victims of war.

Meanwhile, among other award recipients was the group chief executive officer of Hemas Group Kasturi Chellaraja Wilson, who won the Trail Blazer Award for her role as the first female group CEO of a conglomerate in Sri Lanka.

Chairperson of Kandygs Handlooms Sita Yahampath was recognised as the Business Role Model of the Year for leading the way for women in business.

Chairperson of Jetwing Symphony PLC Hiran Cooray was also felicitated as the Male Champion of Change.

Director-General of Sri Lanka Standards Institution Dr Siddhika Senaratne was recognised with the award for Woman of the Year in Career Leadership.

This year’s awards also saw a special felicitation for those who contributed to the fight against covid-19, including medical practitioners, the Police and the Army.

Professor at the University of Sri Jayewardenepura, Neelika Malavige was given the Inspirational Woman Award for her research work on COVID-19.

First Woman Deputy Inspector-General of Police to be appointed in the country, Bimshani Jasin Arachchi was meanwhile felicitated with the Woman of the Year Award under the Defence Force and Civil Society category.

A team of female rubber-tired gantry crane operators at the  Sri Lanka Ports Authority were recognized as Change Makers for Women for their valuable services.