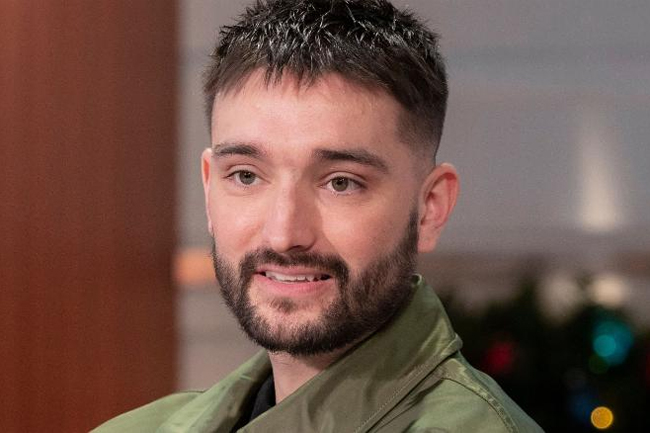 The Wanted star Tom Parker has died at the age of 33 after being diagnosed with terminal brain cancer, the British boy band have announced.

The singer told fans in October 2020 that he had an inoperable tumour.

His wife Kelsey Hardwick wrote on Instagram: “Our hearts are broken.” The pair had two young children together.

She added: “Tom was the centre of our world. We can’t imagine life without his infectious smile and energetic presence.”

Her post continued: “We are truly thankful for the outpouring of love and support and ask that we all unite to ensure Tom’s light continues to shine for his beautiful children.

“Thank you to everyone who has supported in his care throughout, he fought until the very end. I’m forever proud of you.”

The couple married in 2018 and had a daughter, Aurelia Rose, and a son, Bodhi.

The band said they were “devastated” by Parker’s death and that they were with him and his family at his side when he died.

They had two UK number one singles - Glad You Came and All Time Low - and eight other top 10 hits including Chasing The Sun, Heart Vacancy and Lightning.

Kaneswaran also wrote his own post on Instagram, saying: “Hey Tom, hope you’re having a blast up there.

“I am so grateful that I had a chance to witness your true courage. It has been a pleasure of my life Tommy Boy.

“Thank you for letting us see you light up the world. Talk to you soon and see you later. Love you brother x.”

The Wanted reunited for a Stand Up To Cancer Gig at London’s Royal Albert Hall last September, organised by Parker. It also raised money for the National Brain Appeal.

The group then released a greatest hits album in November. Shortly before the album’s release, Parker told fans his brain tumour was “stable” and “under control”.

They then went on tour and Parker put in an appearance sitting on a throne on stage at some of their last shows earlier this month.

BBC Radio 1 DJ Adele Roberts, who revealed in January that she had been treated for bowel cancer, said Parker was “such a hero and an inspiration to me”.

She wrote on Twitter: “He was so strong. Rest In Power Tom and thank you for everything you did.”

Singer Ed Sheeran posted on Instagram: “So sad to hear of Tom’s passing. Thoughts and love are with Kelsey, his children and his family. Very sad day, what a lovely guy.”

TV presenter Gaby Roslin said he was “so brave and such a lovely man”.

Take That’s Howard Donald also paid tribute, writing: “So young and so sad. RIP Tom Parker from The Wanted. Strength and love to his family.”

Rylan Clark said it was “absolutely gutting” news. “He was such a good’un. So sad to hear. Sending my love to Kelsey and the kids,” he wrote.

Former One Direction star Liam Payne said he was “heartbroken”. “[Parker] was so full of life and humour, and the memories I have of him with stay with me forever.”

Fellow British boyband Blue, tweeted that Parker was “an inspiration” and “changed the lives of everyone he came into contact with”.

Singer Joe McElderry tweeted: “So very very sad :( life can be cruel! My thoughts to his family and friends.”

Union J singer JJ Hamblett said it was “such a cruel, cruel world... RIP Tom.. you will be missed but never never forgotten”.

The charity’s Hugh Adams said: “Since his diagnosis Tom has spoken openly and honestly about the impact of the disease and in doing so, has helped to raise awareness of the devastation caused by brain tumours.”