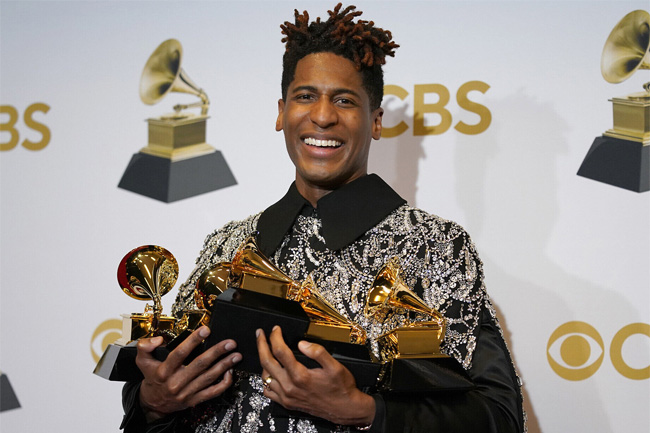 Multi-genre artist Jon Batiste won album of the year and R&B duo Silk Sonic took two of the top honors on Sunday at a Grammy awards ceremony that featured a surprise appeal for support from wartime President Volodymyr Zelenskiy of Ukraine.

Batiste, who leads the band on “The Late Show with Stephen Colbert,” landed five awards overall, including the night’s biggest prize for “We Are,” a jazz album inspired by the Black Lives Matter movement.

“I believe this to my core - there is no best musician, best artist, best dancer, best actor. The creative arts are subjective,” Batiste said. “I just put my head down and I work on the craft every day.”

Batiste’s other wins included best music video for “Freedom,” a vibrantly colored tribute to New Orleans, and an award for composing and arranging of songs for animated Pixar movie “Soul.”

Silk Sonic, featuring Bruno Mars and Anderson .Paak, claimed the song and record of the year awards for their 1970s inspired hit “Leave the Door Open.” The pair rose from their seats and danced slowly before making their way to the stage.

“We are really trying our hardest to remain humble at this point,” joked Paak as the pair accepted the second honor.

“This is my biggest dream come true. Thank you so much!” Rodrigo said as she held her trophy.

Midway through the ceremony, host Trevor Noah introduced a video message from Zelenskiy, who contrasted the joy found through music to the devastation caused by Russia’s invasion of his country more than a month ago.

“What is more opposite to music? The silence of ruined cities and killed people,” Zelenskiy, wearing a green t-shirt, said in a hoarse voice.

“Fill the silence with your music,” he added. “Support us in any way you can. Any, but not silence.” L2N2W10HZ

The remarks preceded a John Legend performance that featured two Ukrainian musicians and a Ukrainian poet.

The highest honors in music were postponed from January during a spike in COVID-19 cases and moved from Los Angeles to the MGM Grand Garden Arena in Las Vegas. Stars walked a red carpet and thousands of spectators packed the venue, a contrast to last year’s scaled-down outdoor event.

Noah urged the audience to think of the evening as “a concert where we are handing out awards.”

“We are going to be keeping people’s names out of our mouths,” Noah added, a jab about actor Will Smith, who a week ago slapped comedian Chris Rock at the Oscars and told him not to mention his wife’s name.

Korean pop band BTS, a global phenomenon that has never won a Grammy, left empty-handed again. But the group delivered a high-octane performance of their hit “Butter,” dodging laser beams in what looked like a scene out of a heist movie.

Rock band Foo Fighters, whose drummer Taylor Hawkins died a little over a week ago, won three awards, including best rock album for “Medicine at Midnight.” No one from the band appeared to accept the trophies.

Winners were chosen by some 11,000 voting members of the Recording Academy.