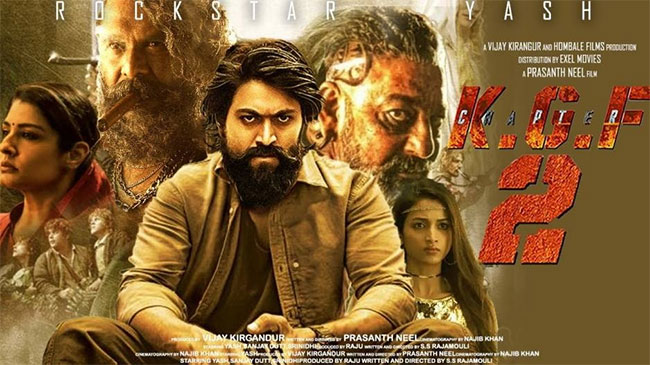 KGF Chapter 2 continues to smash one record after the other. Not just the original Kannada version, the Hindi version of the film has created a storm as well.

The film stars Yash in the lead, along with Sanjay Dutt, Raveena Tandon, Srinidhi Shetty and Prakash Raj in pivotal roles. It has now become the third highest grossing film in Hindi with a collection of ₹343 crore.

The Hindi version of KGF Chapter 1 has a lifetime collection of just ₹44.09 crore.

Written and directed by Prashanth Neel, KGF 2 stands for Kolar Gold Fields (in Karnataka) and is a tale of Rocky (Yash), an orphan who rises from poverty and becomes the king of the gold mining empire there.

The film, which had its first chapter released in 2018, has turned out to be the highest grossing movie of the Kannada industry.

Prashanth has said that the human element within the story, an important aspect for making a massy entertainer, may have worked in the film’s favour.

“The human element is the first thing that we should put in a big movie. When you talk about larger-than-life movies, that human element binds everything together. Like, the way the characters behave should look human to you. We put in a lot of prominence to this (human element) while filming the first and second chapter,” he told PTI in an interview.