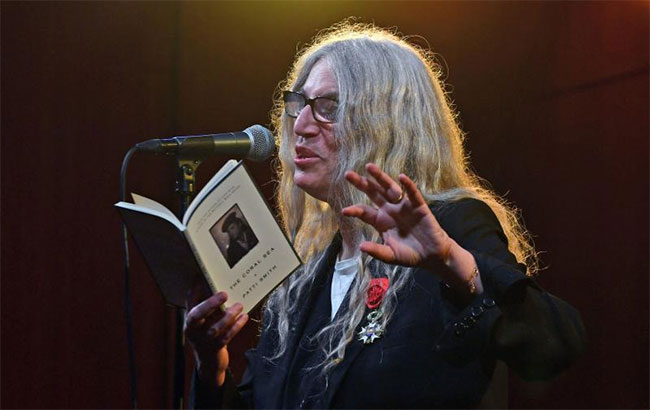 As a child, punk-poet icon Patti Smith was instructed never to accept anything from strangers, which meant one day she was forced to decline a campaign button she coveted and everyone else had.

While dejectedly walking to her New Jersey family home, she vowed to her future self that she would soon acquire her own medals to add to her lapel.

On May 21, the 75-year-old rock legend made good on that promise, as France’s ambassador to the United States Philippe Etienne bestowed her with the Legion d’Honneur, his country’s highest order of merit.

Smith regaled a rapt audience with that touching anecdote after her medal ceremony in central Brooklyn, where crowds gathered for the “Night of Ideas,” an annual marathon of philosophy and performance put on by the French Embassy’s Villa Albertine in partnership with the Brooklyn Public Library.

“It’s an indescribable honor, I understand the gravity of it,” she told AFP backstage, after delivering a spirited performance alongside her daughter Jesse on piano and her long-time collaborator and guitarist Lenny Kaye.

“For someone... who has been greatly shaped by French culture, French literature, French art, and film, just my whole life, it’s especially meaningful,” she continued.

“I embraced France my whole life, and to receive an embrace like this in return is a wonderful thing.”

For more than half-a-century, Smith has been celebrated as an artist’s artist, adored for her music, songwriting, poetry and deeply introspective, raw writing that in 2010 won the U.S. National Book Award for her stirring memoir “Just Kids.”

The book sees Smith excavate memories from her relationship with Robert Mapplethorpe, the late photographer with whom she shared a deep friendship, romance and creative bond.

“I feel like it’s very fitting to have such an accolade here in Brooklyn - it’s only a couple of subway stops away that Robert Mapplethorpe and I lived at 20-years-old,” she told the audience. “At night, when Robert couldn’t sleep, he would ask me to read him French poetry... I remember those nights so clearly.”

Smith also felt a particular kinship to the venue of Saturday’s ceremony.

“It’s also fitting that it should be a library, because coming from a very rural area of South Jersey, with very little culture in the ‘50s and mid-’60s, I depended on the library to open and expand my world,” she said.

In typical Smith fashion, she honored the artists who came before her in closing her acceptance speech, having opened with a performance of her 1996 song “Wing.”

The rock laureate read the final letter by spiritual-surrealist poet Rene Daumal, which he wrote to his wife before his death.

“Seeing that you are nothing you desire to become,” Smith read. “In desiring to become, you begin to live.”

Following the ceremony, Smith, donning her signature black blazer atop a black vest, along with combat boots and her long, gray hair flowing as a few small braids framed her face, delighted fans with a show that included her hit “People Have The Power,” which she wrote with her late husband, Fred “Sonic” Smith.

Speaking to AFP, she said that while “artists can always inspire people, they can rally people, give people hope... in the end, it’s not artists who make change, it’s the people.”

“Through voting, through initiative, through mass marches - it’s the people that make change.”

Citing the ongoing pandemic and the “pain of war,” Smith said “we are living in a very troubled world,” underscoring climate change as the great crisis of our time.

“The only way it can be solved is a global effort, and I think more than anything... that is the most important thing that people have to address.

“However small the gesture, every gesture is important.”

Smith is set in the fall to release a new book entitled “A Book Of Days,” a visual collection inspired by her beloved Instagram account.

After her performance, Smith said the medal inspired her to do “more work, better work,” and it “felt very fitting to work right after I received it.”

“I still feel like I’ve got a little, you know, that post-performance adrenaline,” she smiled, “but also just the excitement and happiness... of receiving such an honor.”

“That I would be chosen to, you know, be a sort of a mini-ambassador for the country is really a great joy for me,” she said.

“So you leave me a happy girl.”