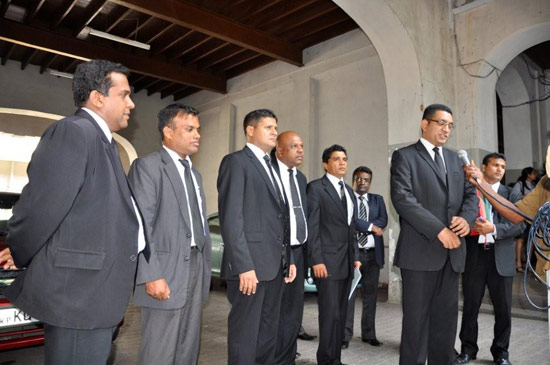 Dilith Jayaweera with his attorneys Ali Sabri and Saman Senadeera outside the District Court of Colombo.

District Judge of Colombo Ranjith Wathupola issued an enjoining order against TNL TV and Isira Radio, and its chairman Shan Wickremasinghe preventing them from causing any defamatory publications against Dilith Jayaweera.

Order was given consequent to an action instituted by Dilith Jayaweera at the District Court of Colombo.

Jayaweera has already sent a Letter of Demand claiming Rs 500 million to Shan Wickremesinghe and his co-host on TNL Isira Radio Dasadesin Puwathpath programme, Mr.Sudath Jaysundera for comments made on the show. Wickremasinghe and Jayasundera claimed that funds used by Jayaweera in stock trading was generated through drug trafficking and money laundering. He further claimed that the downfall of the Colombo stock market was due to the lack of funds in the aftermath of the shooting of MP Duminda Silva.