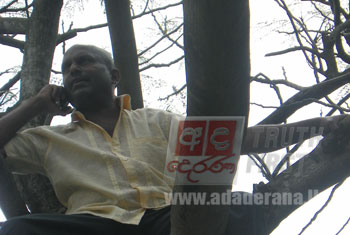 A man climbed a tree and engaged in a protest outside the Hulftsdorp Court Complex in Colombo against the Golden Key fraud which affected around 1200 depositors, an Ada Derana correspondent reported.

Speaking to Ada Derana from atop the tree, K.R. Saman Shantha, a resident of the Rambukkana-Hiriwadunna area stated that his protest was in demand of justice for the depositors who had been cheated.

He stated that he had deposited over Rs.30 million which he had saved over 30 years in the Golden Key company while expressing his dismay at the fact that the hearing of a petition brought forward by the victims of the fraud had been temporarily suspended in the courts due to Chief Justice Shirani Bandaranayakes impeachment case.

He told Ada Derana that he will not end his protest until President Mahinda Rajapaksa, Defence Secretary Gotabaya Rajapaksa or Economic Development Minister Basil Rajapaksa assures him of justice.