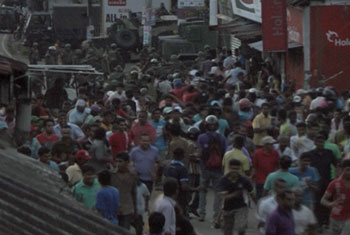 One person reportedly died and several others were injured and hospitalized due to a clash with police and army personnel at Weliweriya town, during a protest against a drinking water crisis affecting the area.
A youth between the age of 30-35 who was hospitalized due to injuries sustained during the unrest has succumbed to injuries, Gampaha Hospital sources told Ada Derana.
Residents of Weliweriya, Rathupaswala and surrounding villages had engaged in a protest today claiming that the chemical waste of a factory has polluted their drinking water.
Police had used tear gas and water cannons to disperse residents of the area who were blocking the road in protest of the issue.
Police spokesman Buddhika Siriwardena said that the protest which had been continuing for the past several hours at Belummahara Junction on the Colombo-Kandy road had caused severe traffic congestion and inconvenience to the public.
Army personnel were later called in to assist the police in dispersing the protestors, which had resulted in a tense situation as they refused abandon the agitation.
The police spokesman said the protestors were chased away with the help of army personnel as they had refused to disperse peacefully.
Meanwhile the factory in question has been temporarily shut down following talks between representatives from the area and Defence Secretary Gotabhaya Rajapaksa regarding the matter.
The Ministry of Defence stated that a joint investigation, with the participation of the water board, universities and relevant parties, will be launched to determine whether the factory is actually the main cause for the contamination of the drinking water in the area.
The ministry said it intends to obtain the inquiry report within two weeks and take further action accordingly.
In addition a new clean drinking water system will be established, instead of the contaminated water, and is expected to be completed within the next 6 weeks.
The affected people will be temporarily provided with drinking water via bowsers, the ministry release said.
Disclaimer: All the comments will be moderated by the AD editorial. Abstain from posting comments that are obscene, defamatory or slanderous. Please avoid outside hyperlinks inside the comment and avoid typing all capitalized comments. Help us delete comments that do not follow these guidelines by flagging them(mouse over a comment and click the flag icon on the right side). Do use these forums to voice your opinions and create healthy discourse.