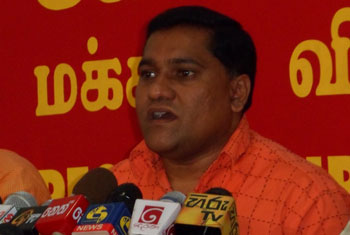 Govt responding to peoples issues with batons and bullets - JVP

Condemning yesterdays attack on protestors at Weliweriya, the JVP today accused the government of responding to peoples calls for clean drinking water with batons and using the army to attack media personnel to prevent them from reporting such incidents.

The residents of Rathupaswala fought and protested for several days requesting clean water to drink, however the government responded by using the army to open fire, attack them with batons, break their limbs and in the end by killing people, JVP MP Vijitha Herath said.

He stated that the JVP condemns such attacks carried out by the army as well as the shooting and killing of innocent people.

Those people asked for their right to clean drinking water, they did not have weapons and they did not engage in an armed struggle against the forces, he told reporters in Colombo today.

Elderly people and pregnant women took to the streets because a problem which threatens their lives has risen, but the government failed to provide a solution, Herath said

The governments answer was to use the Special Task Force and police to attack the residents of Rathupaswala, Weliweriya with batons and open fire at them, he said.

The JVP propaganda secretary further charged that what the army first did was remove all media personnel at the scene of the protest. They grabbed the cameras from journalists, leaned them against power poles and assaulted them calling them dogs, he charged.