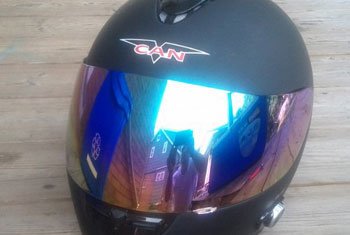 Implementation of the helmet law for motorcyclists temporarily suspended due to the exploitation of the law by traders, Police spokesman said today.  On November 7 police advise motorcyclists and passenger riders to wear authorized helmets without tinted visors enabling better identification from today.

The Spokesman added that certain traders are charging exorbitant prices for authorized helmets making it a great burden for low income earning persons who rider motorcycles.

A statement issued by the Police Headquarters on November 7 stated that laws pertaining to motorcycle helmets are included in the special gazette notification No. 644/26 (January 11, 1991) while these regulations have been prepared by the relevant minister under the clause 158 (2) and 237 of the Motor Traffic (Amendment) Act (No. 21 of 1981).


According to the law the chin strap of an authorized helmet provides protection for the motorcycle rider and the passenger, the face area of the helmet should remain open for clear identification of the person wearing it.


The helmet should not contain any parts or extensions which conceal or distort any part of the face (between the eyebrows and chin) of the rider.


Furthermore the visor of the helmet should not be tinted or painted with any color, it said.

Police said that while the risk is higher for those wearing unauthorized helmets to die or suffer injuries in accidents, several reports have been received of criminals wearing tinted helmets to hide their identification when fleeing the scene of the crime.