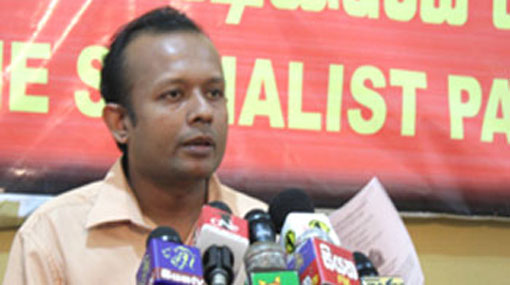 Referring to renewed orders from the new President allowing troops to be deployed across the island, the party’s Propaganda Secretary Pubudu Jayagoda stated that during his election campaign Maithripala Sirisena had given priority to this issue when speaking about democracy.

One of the main topics of Maithripala’s Presidential Election campaign was the pledges to do away with these oppressive laws and the demilitarization, he said, adding, that the Common Candidate promised to establish democracy within the country instead.

However, according to a presidential decree, Sirisena has now renewed a monthly authorisation for the deployment of troops.

“By virtue of the powers vested in me, I, Maithripala Sirisena, do by this order call out all the members of the armed forces ... for the maintenance of public order,” read the order.

Mr Jayagoda stated that on February 03, when the previous order officially expired, his party was paying close attention to see if the new President would follow in the same footsteps of his predecessor and sign this “oppressive decree” and issue the relevant gazette notification.

He pointed out that President Sirisena had signed the decree February 02 and issued the gazette notification.

“What happened under Mahinda Rajapaksa has begun to recur only with the President’s name changed,” Mr Jayagoda told reporters in Colombo.

The Tamil National Alliance (TNA) is reportedly miffed with the government for issuing the gazette notification deploying troops in all the districts of Sri Lanka.

“This is unwarranted. When there is no violence in the North or anywhere in the country, why should troops be deployed and invested with police powers?” asked a livid Suresh Premachandran, TNA spokesman and MP for Jaffna district.

“We could understand why the previous Rajapaksa regime deployed troops. It had done many wrong things and was always expecting trouble from the people. But the Sirisena government has a clean image and yet it is deploying troops,” Premachandran said. President Sirisena seems to have forgotten that he was elected because of the overwhelming support he got from the Tamils, Premachandran pointed out.

Defending the action of the government, Cabinet spokesman Dr Rajitha Senaratne said that the gazette notification was a routine one issued during the time of national functions and election, adding, “we cannot move troops without such a notification”.

However, unconvinced by this, Premachandran asked, “Why was the deployment not annulled after independence day?”

TAGS :  Frontline Socialist Party ,  troops ,  Pubudu Jayagoda ,  President Maithripala Sirisena ,  Suresh Premachandran ,  Rajitha Senaratne ,
Disclaimer: All the comments will be moderated by the AD editorial. Abstain from posting comments that are obscene, defamatory or slanderous. Please avoid outside hyperlinks inside the comment and avoid typing all capitalized comments. Help us delete comments that do not follow these guidelines by flagging them(mouse over a comment and click the flag icon on the right side). Do use these forums to voice your opinions and create healthy discourse.