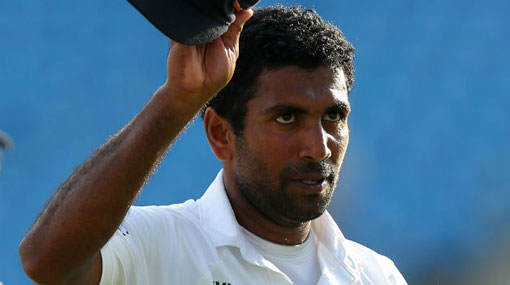 Sri Lanka were dealt a blow on Saturday (February 7) as Dhammika Prasad was ruled out of the 2015 World Cup due to an injury.

Sri Lanka, likely to go into the marquee event without Lasith Malinga, will have to make do without Prasad after the right-arm seamer fractured his left hand while attempting a return catch during a practice session.

“Dhammika Prasad was hit on the outside of the left hand when attempting a return catch while bowling today,” said a Sri Lanka Cricket statement. “The X-ray showed a fracture of the fifth metacarpal bone. The fracture has been realigned and put in a cast. Dhammika will not be available for the upcoming World Cup.”

The World Cup, co-hosted by Australia and New Zealand, kicks off on February 14. Prasad, who has 32 wickets from 24 ODIs, would have been a handful on bouncy tracks with his natural tendency to hit the deck hard.

In the absence of Prasad, who was one of the bright spots in Sri Lanka’s tour of New Zealand which they lost 4-2, the side will bank on Nuwan Kulasekara and Suranga Lakmal to lead the pace battery alongside Angelo Mathews, the Sri Lankan skipper, Thisara Perera and Dimuth Karunaratne.

Sri Lanka will write to the International Cricket Council, asking the parent body to allow a replacement.

Should Malinga, who was conditionally included in the squad for the tour of New Zealand but didn’t feature in a game, not recover from the arthroscopic surgery on his left ankle in time for the tournament, Sri Lanka’s World Cup hopes will largely depend on their experienced batting line-up and spinners.

TAGS :  World Cup 2015 ,  Dhammika Prasad ,  Lasith Malinga ,  Nuwan Kulasekara ,  Angelo Mathews ,  Australia ,  New Zealand ,
Disclaimer: All the comments will be moderated by the AD editorial. Abstain from posting comments that are obscene, defamatory or slanderous. Please avoid outside hyperlinks inside the comment and avoid typing all capitalized comments. Help us delete comments that do not follow these guidelines by flagging them(mouse over a comment and click the flag icon on the right side). Do use these forums to voice your opinions and create healthy discourse.