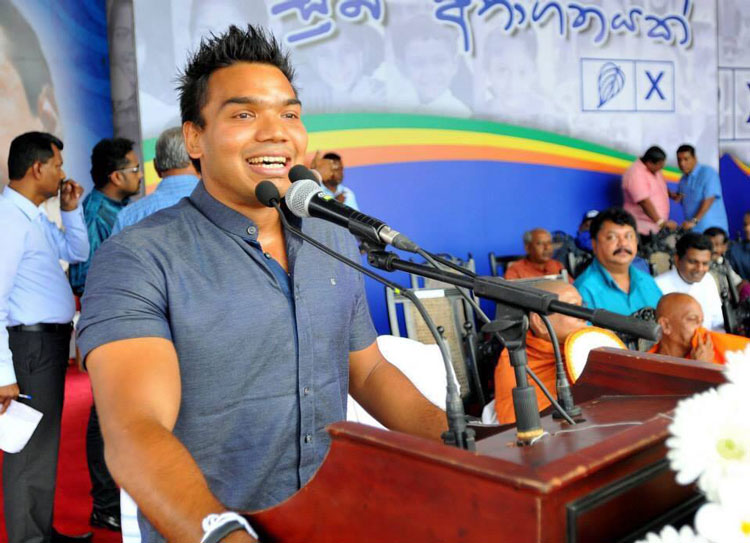 Namal says he voted for the budget with reluctance

Parliamentarian Namal Rajapaksa said that he voted favorably on the new Government’s interim budget with ‘reluctance’ because of concerns he has about the unsustainable nature of the proposals that have been presented.

In a statement he said “the Sri Lanka Freedom Party (SLFP) has taken a decision to vote for the interim budget presented by the new Government. In the interest of maintaining the integrity and unity of the Party, I have decided to stand with the Party decision. However, I do so with reluctance because of concerns I have about the unsustainable nature of the proposals that have been presented.

Consider, for example, the reduction in the prices of petrol, diesel, LP gas, and kerosene. Fuel reductions are generally welcome measures. However, though it would appear to be an immediate relief to the public, the extent of the reduction in fuel prices, unfortunately, are unlikely to be sustainable in the long run and could have an immensely negative impact on the overall economy. Even though global oil prices were low at the time the present Government decreased fuel prices, this past week, crude prices have seen a marked increase. How sustainable this price reduction will be is the concern. While it may be easy to please the public in the short-term with such measures, such ad-hoc decisions are more likely to have a negative long-term impact on the country’s economy and thus the everyday lives of ordinary citizens.

Another concern is the extent to which the Government has decided to increase salaries. We agree in principle with the need to increase salaries. In fact, it was former President Mahinda Rajapaksa who first proposed the increase of salaries and pensions in the 2015 National Budget that he presented last year. However, the new administration has amplified the salary hike to a level that will not be sustainable, once again.
There are also a number of concerns with regard to proposals pertaining to the agricultural sector as well. First, even though the Government has proposed a guaranteed price of Rs. 50/kg for paddy, it will be difficult to secure that price with the low prices of wheat flour and bread. Additionally, considering the duty free imports for products like green gram, dry fish and other grain varieties, there will be a negative impact for farmers of these agricultural products. The bottom line is that these budget proposals will almost definitely hurt the local farmers, not help them.

Then there is the Rs. 1 billion tax imposed on casinos and sports-related television channels. How was this taxation amount decided? What is the basis? While we completely agree with imposing any amount of tax on casinos, what is the logic behind imposing the same tax on types of businesses that generate vastly different ranges of profit? Furthermore, doesn’t the imposition of taxes on casinos imply regulation of that industry? Didn’t this administration propose the shutting down of all casinos in the country? The public needs to be aware of this double standard that is being practiced by the current administration.

There are further concerns on how taxation will impact investors and the private sector overall. Sri Lanka’s business community has already expressed great dissatisfaction at the super gains tax that has been included in the interim budget. Although justifications are being made for this tax, citing short-term revenue needs, it sets a very dangerous precedent, one that will make it acceptable to penalize successful businesses every time the government sees the need to generate short-term revenue. Furthermore, should successful businesses in the country be punished for being efficient and producing good returns? It is certain to scare away any potential investors from even considering Sri Lanka to set up a new venture.

While there are a number of other worrying aspects about the proposed budget, the one other aspect I would like to point out here is the reduction in the prices of essential items that was much hyped-about leading up to the presentation of the budget. However, other than perhaps flour, sugar and milk powder, the products chosen for this reduction in prices was a big letdown to the public.

I stand with the new Government’s claims that the budget must provide relief to those that are less fortunate, to those who are finding it difficult to provide for their families. It is crucially important for us to help our fellow Sri Lankans lift themselves out of poverty. Those who have been fortunate enough to profit can be asked to withstand more of a burden on behalf of the society at large. But unfortunately, it seems very obvious that this budget was prepared to please the public with impending elections in mind, with short-sighted proposals that are more appropriate for a 100-day programme rather than the entire year that national budgets should be targeted towards.

It is my hope that the strength of the economy that was maintained during the past nearly two decades will be adequate to rectify these short-term negative effects.”

TAGS :  Namal Rajapaksa ,  interim budget ,  SLFP ,  Government ,
Disclaimer: All the comments will be moderated by the AD editorial. Abstain from posting comments that are obscene, defamatory or slanderous. Please avoid outside hyperlinks inside the comment and avoid typing all capitalized comments. Help us delete comments that do not follow these guidelines by flagging them(mouse over a comment and click the flag icon on the right side). Do use these forums to voice your opinions and create healthy discourse.