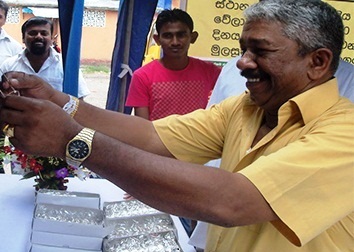 Self-Employed Persons Federation’s President Mahinda Kahanda Gamage has been arrested by the Fraud Investigation Unit of the Wellawatte police, this afternoon.

The police said the suspect was arrested following a complaint lodged with the Police Headquarters on 19 January.

According to the police, Kahanda Gamage has allegedly swindled money of hundreds of mobile vendors whose money was collected daily as a tax. The suspect has not also maintained a detailed account of records, it was reported.

TAGS :  Mahinda Kahanda Gamage ,
Disclaimer: All the comments will be moderated by the AD editorial. Abstain from posting comments that are obscene, defamatory or slanderous. Please avoid outside hyperlinks inside the comment and avoid typing all capitalized comments. Help us delete comments that do not follow these guidelines by flagging them(mouse over a comment and click the flag icon on the right side). Do use these forums to voice your opinions and create healthy discourse.