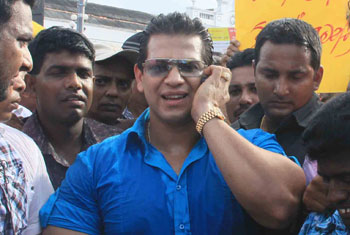 UPFA Parliamentarian R. Duminda Silva is to be summoned to the Criminal Investigations Department (CID) today for further questioning on money laundering charges.

The Colombo District MP has been informed to appear before the CID at 11.00am today, police spokesman SSP Ajith ROhana said.

Silva was also questioned yesterday (10) for nearly six hours by the CID in connection with his alleged involvement with the drug kingpin Gampola Widanage Samantha Kumara alias ‘Wele Sudha,’ who was recently arrested in Pakistan and brought to Sri Lanka.

The suspect had revealed to police that he paid Rs. 2.5 million to the Parliamentarian as a commission.

The CID had also obtained a court order to probe the bank accounts of Silva, after ‘Wele Sudha’ testified he paid money to the politician.

The CID is interrogating the drug kingpin under a three months detention order on the details on how he managed to carry out drug related operations from Pakistan.

Wele Sudha fled the country after the police launched open inquiries into his activities in 2010.

Wele Sudha’s assets including two luxury apartments, two houses in Bagatalle Road, two houses in Pannipitiya and Madiwela, 16 perches land in Dehiwala and 14 perches in Nedimale had been confiscated by the Colombo High Court.

TAGS :  Duminda Silva ,  CID ,  Samantha Kumara ,  Wele Suda ,  Pakistan ,  drug kingpin ,
Disclaimer: All the comments will be moderated by the AD editorial. Abstain from posting comments that are obscene, defamatory or slanderous. Please avoid outside hyperlinks inside the comment and avoid typing all capitalized comments. Help us delete comments that do not follow these guidelines by flagging them(mouse over a comment and click the flag icon on the right side). Do use these forums to voice your opinions and create healthy discourse.