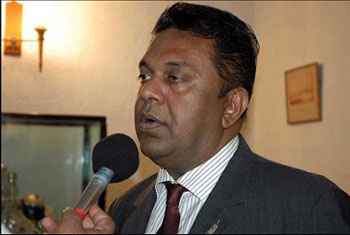 Sri Lankan Foreign Minister Mangala Samaraweera said on Wednesday his country was seeking a delay of several months in the release of a U.N. report on alleged war crimes during his country’s civil war until the government had time to establish a mechanism to deal with the issue.

“We are in the process of trying to set up this internal domestic mechanism,” Samaraweera said at the Carnegie Endowment for International Peace, ahead of his talks with US Secretary of State John Kerry.

He denied assertions that the call for a postponement of the report was an attempt to buy time.

“We are hoping they could hold on to it until our mechanism is in place,” he said, adding that the domestic probe would be set up and will be functional in about two months.

In March last year, the U.N. Human Rights Council voted to look into reports of abuses during the Sri Lankan civil war, saying the Sri Lankan government had failed to investigate properly. The U.N. report is due out on March 25.

“Once the report is finalized, we are hoping they can refer it to our domestic mechanism for action,” Samaraweera told reporters during a visit to Washington. “We are hoping they could hold on to it until our mechanism is in place – maybe August, you know, or so.”

“We are ready to ensure that those who have violated human rights in Sri Lanka will be brought to justice through such a mechanism. But to ensure that it is done in a credible manner we are also looking at technical assistance from the international community,” he said.

U.N. human rights spokesman Rupert Colville declined comment earlier on Wednesday when asked about the possibility of a delay in the report, but when pressed, said it was still scheduled for release on March 25, Reuters reports.

TAGS :  Mangala Samaraweea ,  UN ,  UNHRC ,  war crimes ,  US ,  Foreign Minister ,
Disclaimer: All the comments will be moderated by the AD editorial. Abstain from posting comments that are obscene, defamatory or slanderous. Please avoid outside hyperlinks inside the comment and avoid typing all capitalized comments. Help us delete comments that do not follow these guidelines by flagging them(mouse over a comment and click the flag icon on the right side). Do use these forums to voice your opinions and create healthy discourse.