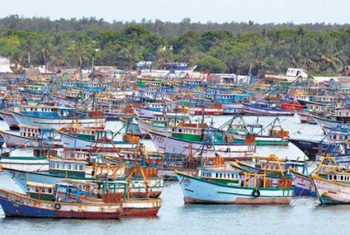 Indian fishermen’s leaders and owners of the 87 fishing vessels detained by Sri Lanka, were ecstatic when they learnt that the boats were going to be released this week on the orders of Sri Lankan President Maithripala Sirisena.

But they are concerned about the state of the boats, which might have suffered decay and damage due to months of neglect, and are seeking compensation from the Indian and Sri Lankan governments.

“I am extremely happy to hear about the release. From the bottom of my heart, I thank the Sri Lankan President for it. But I fear that 47 of the 87 boats may have suffered severe damage as they have been in water for months, some for eight months. Their owners need to be compensated by the authorities,” said U. Arulanandam, a veteran fishermen’s leader of Rameswaram.

The Director General of Fisheries, Nimal Hettiarachchi, said on Thursday, that on the instructions of President Sirisena, the Attorney General had sent word to the courts dealing with the boats’ case, that he had no objection to their release. The courts at Kayts, Mannar, Point Pedro and Trincomalee were expected to order their release on Thursday.

According to another fishermen’s leader, Devadas, 30 to 32 boats are unusable.

“Returning these damaged boats will not bring much relief to the owners, who are already in a bad way economically. Many boat owners have been working as coolies or doing odd jobs in the fishing industry for the last several months,”  Devadas told Express over the phone.

He said that he had met Foreign Minister Sushma Swaraj in connection with this problem and she told him that compensation is possible. The Tamil Nadu government had also promised to pitch in, he added.

Boat owner Ramesh said that since the loss of his boat, he had sunk deeper into debt with a cumulative debt of Indian Rupees 15 lakhs.

“ I had pawned my wife’s gold jewelry and am unable to retrieve it,” he said.

Ramesh has no idea about the condition of his boat. “If it is not in a usable condition, I will not take it,” he said.

Boat owner Sekaram said that he was “very happy” to learn of the release but wondered in what condition his boat is in.

“ We have asked for compensation from our government. Hope we will get it,” he said.

Jesuraja, a mechanized boat owner, said that the Indian and Sri Lankan governments should now take the next step and re-start talks between the fishermen of the two countries. Talks might be held in Chennai on March 5.

“The fishermen of the two countries should be able to fish in the same area without harming each other’s livelihood,” Jesuraja said.

He also suggested that the Indian and Sri Lankan governments should join together to compensate the fishermen who had lost their boats and were reduced to penury.

Colombo’s decision to release the vessels was dictated by President Sirisena’s  desire to have friendly relations with India, and to retrieve bilateral ties from the abyss  it had fallen into during the Presidency of his predecessor, Mahinda Rajapaksa.

Furthermore, Sirisena is to begin a three day trip to India on February 15, his first official visit to any country since he took over in January. The release of the 87 Indian boats should pave the way for smooth talks with Indian Prime Minister Narendra Modi at New Delhi. – Indian Express

TAGS :  Indian fishermen ,  TN ,  Maithripala Sirisena ,  fishing boats ,  Nimal Hettiarachchi ,  Narendra Modi ,  Mahinda Rajapaksa ,
Disclaimer: All the comments will be moderated by the AD editorial. Abstain from posting comments that are obscene, defamatory or slanderous. Please avoid outside hyperlinks inside the comment and avoid typing all capitalized comments. Help us delete comments that do not follow these guidelines by flagging them(mouse over a comment and click the flag icon on the right side). Do use these forums to voice your opinions and create healthy discourse.