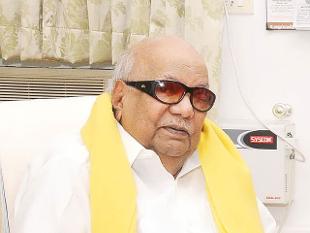 DMK president M Karunanidhi on Friday urged Prime Minister Narendra Modi to consider moving a resolution in the UNHRC against Sri Lanka over alleged genocide and wanted India to support adoption of a human rights violation report in the world body.

“The UNHRC committee set up to inquire human rights violations of the Rajapaksa government is going to submit its report next month. Tamils anxiously expect India to support adoption of the report in the UNHRC,” he urged.

Ahead of the ensuing visit of Sri Lankan President Maithripala Sirisena to Delhi, the DMK chief said though Tamils had high hopes of a life with dignity and equal rights after his election in that country “what is now happening in Sri Lanka has upset the Tamils.”

“The promises and announcements are too many and what has been achieved is either nil or very little.” He also cited a Presidential notification of Sri Lanka after Sirisena took office which directed armed forces to maintain public order in traditioanl Tamil areas, and cautioned that it would have adverse consequences.

Though implementation of 13th amendment (an Indian initiative aimed at giving more powers to provinces) in the Sri Lankan constitution is not viewed as a panacea by Tamils, as it does not envisage devolution of land and police powers, it could still be the first step towards effective devolution of powers, he said. On the “sufferings of Tamil Nadu fishermen going out for fishing in the sea at the hands of Sri Lankan Navy”, he wanted it to be discussed with Sirisena to arrive at a lasting solution.

“I will be grateful if you could kindly discuss with the Sri Lankan President for arriving at a lasting solution to the problems of the Tamil Nadu fishermen,” he said. - PTI

TAGS :  Karunanidhi ,  DMK ,  Narendra Modi ,  UNHRC ,  resolution ,  Northern Provincial Council ,  Tamil Eelam Supporters Organisation ,  fishermen ,
Disclaimer: All the comments will be moderated by the AD editorial. Abstain from posting comments that are obscene, defamatory or slanderous. Please avoid outside hyperlinks inside the comment and avoid typing all capitalized comments. Help us delete comments that do not follow these guidelines by flagging them(mouse over a comment and click the flag icon on the right side). Do use these forums to voice your opinions and create healthy discourse.