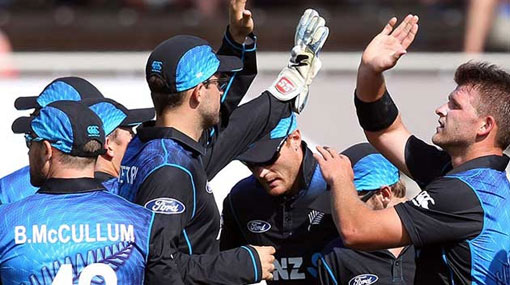 In-form Kane Williamson also chipped in with a useful 57 on a batting pitch at the Hagley Oval as the Black Caps hit the Lankan bowlers all over the park.

Chasing a stiff target, Sri Lanka lost three key wickets, including those of Mahela Jayawardene (0) and Kumar Sangakkara (39), in a heap in middle overs to be bundled out for 233 in 46.1 overs and lose the lopsided Group A game.

Opener Lahiru Thirimanne was the lone batsman to offer any semblance of a fight with a 60-ball 65 while captain Angelo Mathews made 46 as Sri Lankan batting came a cropper.

Mathew’s decision to bowl first seemed correct as there was light rain just after the toss and the start of the match was delayed by eight minutes but it ultimately boomeranged as the home side batsmen made a flying star and there was hardly any lull except a few overs midway into the Kiwi innings.

McCullum, who hit 10 fours and a six in his 49-ball knock, and Martin Guptill (49) put on 111 runs from 15.5 overs for the opening wicket before a twin strike off consecutive deliveries by leg-spinner Jeevan Mendis in the 34th over — that of Williamson and Ross Taylor (14) — put brakes on the New Zealand innings.

But, Anderson, who came out at 193 for 4 in the 34th over, upped the tempo for New Zealand with his 75 off 46 deliveries, which included eight fours and two sixes, before he was out on the last ball of the innings.

Sri Lanka made a cautious start without losing early wickets and they were on track till the 22nd over when they were 124 for one. But, three quick key wickets fell — that of Thirimanne, Jayawardene and Sangakkara — as Sri Lanka lost the plot from there on to suffer a crushing defeat.

Veteran left-arm spinner Daniel Vettori gave New Zealand the breakthrough by having Tillakaratne Dilshan caught and bowled for 24 before pacer Trent Boult sent Thirimanne’s wickets cartwheeling in the last ball of the 22nd over.

That triggered a mini collapse as six balls later Vettori got the wicket of Jayawardene as wicketkeeper Ronchi gleefully snapped an outside edge.

Next over, Boult returned to win an LBW decision against Sangakkara, who today became the second highest run scorer in ODI cricket after surpassing former Australian captain Ricky Ponting, as Sri Lanka were reduced to 129 for four from 124 from one in the space of two overs.

Mathews gave some fight with a 52—ball 46 but the asking rate had crossed 10 runs per over by the 35th over and 12 an over at the end of 40th over with three wickets in hand. When Mathews was out in the 42nd over as the eighth batsman to be dismissed it was all over for Sri Lanka.

Earlier, the home side made a rollicking start with McCullum and Guptil racing to 77 for no loss at the end of 10 overs with the Kiwi captain smashing an erratic Lasith Malinga for 23 runs in the bowler’s fourth over and eighth of innings.

Malinga was taken off immediately after conceding 42 runs from his first spell of four overs. An expensive Malinga ended the day wicketless while conceding 84 from his 10 overs.

New Zealand reached to 100-mark in the 14th over but McCullum got out two overs later while going for a pre-determined shot off left-arm spinner Rangana Herath only to find Jeevan Mendis just mere inches from boundary ropes.

New Zealand lost their first wicket at Nelson score of 111.

The other partner, Guptil was out in the 23rd over off Suranga Lakmal with wicketkeeper Kumar Sangakkara diving to his right to take the edge offered by the batsman.

Sri Lanka were able to slow down the New Zealand innings in the middle overs with Lakmal, Herath and Angelo Mathews bowling economical spells. It looked like the match could turn on its head as the home side were dealt a double blow with Williamson and Taylor getting out in consecutive balls in the 34th over bowled by Mendis

But Anderson had other ideas in his mind as he smashed the Lankan bowlers to all over the park in his 46-ball innings to take New Zealand to an imposing total.

For Sri Lanka, Lakmal and Mendis grabbed two wickets each while Herath and Kulasekara got one apiece. - PTI

TAGS :  ICC 2015 Cricket World Cup ,  Kumar Sangakkara ,  Mahela Jayawardene ,  Hagley Oval ,  Black Caps ,  Angelo Mathews ,  Christchurch ,  Sri Lanka Cricket ,   ,
Disclaimer: All the comments will be moderated by the AD editorial. Abstain from posting comments that are obscene, defamatory or slanderous. Please avoid outside hyperlinks inside the comment and avoid typing all capitalized comments. Help us delete comments that do not follow these guidelines by flagging them(mouse over a comment and click the flag icon on the right side). Do use these forums to voice your opinions and create healthy discourse.