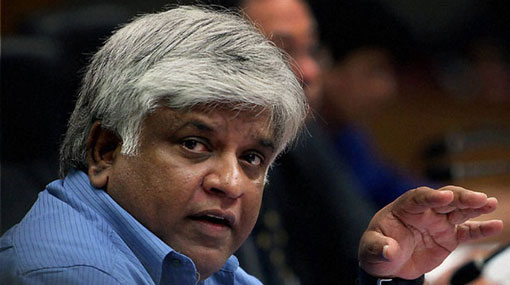 Arjuna dismayed by delay in punishment

Minister of Ports, Shipping and Aviation Arjuna Ranatunga today expressed dismay at the delay in punishing of corrupt officials charged with misconduct under the previous regime.

Speaking to media during an inspection tour at the Civil Aviation Authority (CAA) this morning, the former cricketer said that he was also part of the then UPFA government for a period and that he opted to quit because he “couldn’t bow my head to unnecessary things.”

“However, I too am a little dismayed due to the delay in punishing thieves,” the Minister said.

Ranatunga said that he has been informed through phone calls and other methods regarding various irregularities and that he would take necessary measures after proper confirmation .

“I am not innocent. The law will be implemented regardless of who the wrongdoers are. Neither the President nor the Prime Minister will interfere in these institutions.

“Do not engage in politics within institutions. I will take appropriate decisions because I was born into a political family. Reduce the unnecessary expenses in these (institutions). Stop the corruption,” he urged state officials.

TAGS :  Arjuna Ranatunga ,  Civil Aviation Authority ,  UPFA ,  CAA ,  corruption ,
Disclaimer: All the comments will be moderated by the AD editorial. Abstain from posting comments that are obscene, defamatory or slanderous. Please avoid outside hyperlinks inside the comment and avoid typing all capitalized comments. Help us delete comments that do not follow these guidelines by flagging them(mouse over a comment and click the flag icon on the right side). Do use these forums to voice your opinions and create healthy discourse.