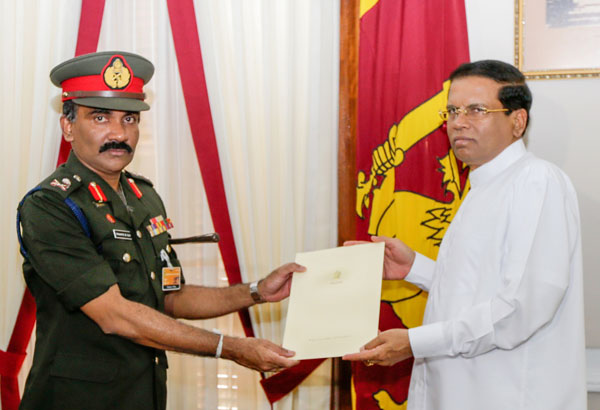 Former Chief of Staff of the Army Major General Chrishantha de Silva has been appointed as the 21st Commander of the Sri Lanka Army (SLA) by President Maithripala Sirisena.

Major General A.W.J.C De Silva has been appointed as the 21st Commander of the Sri Lanka Army, effective from February 22, 2015 on the directions of the President Maithripala Sirisena as the Commander in Chief of the Armed Forces, Ministry of Defence announced on Friday (20).

Incumbent Army Chief Lieutenant General Daya Ratnayakedue is due for retirement from February 21.

De Silvawas appointed as the Chief of Staff of the Army on July on August 1, 2013 the same day Lieutenant General Daya Ratnayake assumed office as the 20th Commander of the Army.

However, Major General Prasad Samarasinghe was appointed as the Chief of Staff of the Sri Lanka Army with effect from 17 May, 2014 while Major General De Silva took over the Deputy Ambassador post in Russia.

Major General A.W.J.C De Silva had joined the Sri Lanka Army as Cadet Officer in 1980 and has served in many regions including operational areas. He has been awarded a number of medals including the Rana Wickrama Padakkama.

An old boy of Royal College Colombo, he completed 36 years of service in the army and also served as a Commander in Chief in the volunteer force.

TAGS :  Sri Lanka Army ,  SLA ,  Major General ,  Daya Ratnayake ,  Army Commander ,  Maithripala Sirisena ,  Chrishantha De Silva ,
Disclaimer: All the comments will be moderated by the AD editorial. Abstain from posting comments that are obscene, defamatory or slanderous. Please avoid outside hyperlinks inside the comment and avoid typing all capitalized comments. Help us delete comments that do not follow these guidelines by flagging them(mouse over a comment and click the flag icon on the right side). Do use these forums to voice your opinions and create healthy discourse.