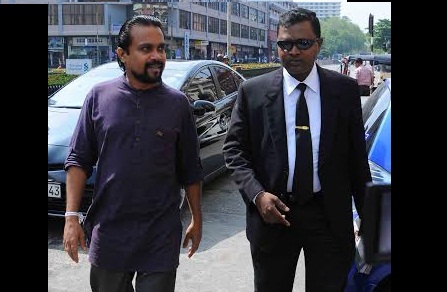 Ex-Minister Wimal Weerawansa on Monday (23) denied allegations leveled against his wife describing it as a “totally false” complaint.

Weerawansa speaking to reporters said false allegations have been leveled against him and his family what he explained as an alleged plan to sabotage his political career.

“Forged passport case against my wife is a false complaint. The truth will be revealed in the courts,” he added.

“This is an era where the ‘black tigers’ would get pardoned on the day of independence, while persons who dedicated to eliminate terrorism from the country are treated with a prison cell,” said Weerawansa.

Weerawansa was summoned to the Police Headquarters and was questioned by the Criminal Investigation Department (CID) officers in connection with a complaint lodged by Kaduwela Mayor H.A. Buddhadasa in 2011.

TAGS :  Shashi Weerawansa ,  Wimal Weerawansa ,  CID ,  Buddhadasa ,
Disclaimer: All the comments will be moderated by the AD editorial. Abstain from posting comments that are obscene, defamatory or slanderous. Please avoid outside hyperlinks inside the comment and avoid typing all capitalized comments. Help us delete comments that do not follow these guidelines by flagging them(mouse over a comment and click the flag icon on the right side). Do use these forums to voice your opinions and create healthy discourse.