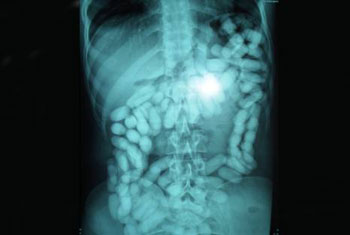 Ending a wait that lasted about three days, Indian Customs officials succeeded in recovering the gold stuck in the abdomen of a Sri Lankan national who attempted to smuggle gold into the country by swallowing it.

Muhammad Suwair, 46, had swallowed five gold biscuits of 100 grams each. “We have recovered 12 of the 13 gold pieces from his stomach,” they said.

Hospital authorities were about to discharge him on Tuesday afternoon when an X-ray revealed a gold piece inside his stomach. So far, 630 grams of gold was recovered from him, which included two gold bars weighing about 80 grams.

Preliminary investigations indicated that the accused had procured the metal from Singapore and crushed it into small pieces. The coins were swallowed after wrapped them in condoms, the Hindu reports.

TAGS :  Gold ,  smuggle ,  India ,
Disclaimer: All the comments will be moderated by the AD editorial. Abstain from posting comments that are obscene, defamatory or slanderous. Please avoid outside hyperlinks inside the comment and avoid typing all capitalized comments. Help us delete comments that do not follow these guidelines by flagging them(mouse over a comment and click the flag icon on the right side). Do use these forums to voice your opinions and create healthy discourse.