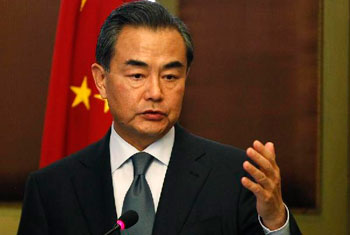 China on Friday formally backed a trilateral partnership with India and Sri Lanka to establish a Maritime Silk Road (MSR) and promote the rise of Eurasia.

Responding to a question from The Hindu , during a joint press conference with visiting Sri Lankan Foreign Minister Mangala Samaraweera, Chinese Foreign Minister, Wang Yi declared that “China is open to a triangular cooperative relationship” involving India and Sri Lanka. He reinforced the three-way engagement by pointing out that China would like to “expedite such cooperation and see practical measures between China and India,” where each country would pool its bilateral strengths, leading to Sri Lanka’s social and economic development.

Mr. Wang’s comments, signalling a more inclusive strategic appreciation of the region, run counter to Indian concerns, expressed during former President Mahinda Rajapaksa’s tenure, that a firm military relationship between China and Sri Lanka in the Indian Ocean was taking root, following the docking of a Chinese submarine in Colombo.

Mr. Wang said China would “certainly like to hold talks” with India on a triangular relationship with Sri Lanka in the future, in tune with Sino-Indian partnership on key global and regional issues. The Chinese Minister commented that Beijing would like to see progress in India-Sri Lanka relations, which would become a factor of stability in South Asia.

With the conceptual lines of a triangular relationship surfacing, Mr. Samaraweera also said Sri Lanka saw China as a “great friend” and India as a “neighbour and relative.” He stressed that Sri Lanka’s centrist and pragmatic foreign policy, liberated from any specific ideology, was grounded in the principle of non-alignment, and was ultimately geared to benefit the Sri Lankan people.

Part of Mr. Samaraweera’s agenda was to prepare for next month’s visit to China by President Maithripala Sirisena, and fast-tracking high level exchanges including the possible visit to Colombo by Chinese Prime Minister Li Keqiang.

Both sides are looking at the signing of a Free Trade Area (FTA) accord and prioritising tie-ups in the field of healthcare, agriculture, science and technology and people-to-people relations. - The Hindu

TAGS :  Mangala Samaraweera ,  Maithripala Sirisena ,  Beijing ,  China ,  Wang Yi ,  Li Keqiang ,  Maritime Silk Road ,  President Mahinda Rajapaksa ,  Eurasia ,  Sino-Indian ,
Disclaimer: All the comments will be moderated by the AD editorial. Abstain from posting comments that are obscene, defamatory or slanderous. Please avoid outside hyperlinks inside the comment and avoid typing all capitalized comments. Help us delete comments that do not follow these guidelines by flagging them(mouse over a comment and click the flag icon on the right side). Do use these forums to voice your opinions and create healthy discourse.