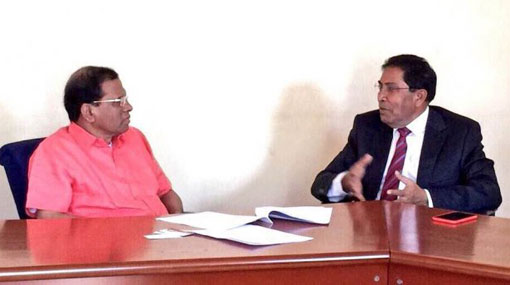 Qasim Ibrahim, the leader of the Jumhooree Party (JP) also known as Republican Party, one of the main opposition parties in Maldives, on Saturday called on Sri Lankan President Maithiripala Sirisena.

Former Police Commissioner of Maldives Ali Riyaz and JP spokesperson Ali Solih had also participated in the meeting – held at the Presidential Secretariat.

Ibrahim had shared his view on the current political situation in the Maldives with President Sirisena, Haveeru Online reported.

According to the report, the meeting was part of the Maldivian Democratic Party (MDP) and JP’s joint opposition effort ‘to defend and uphold the Maldivian constitution’.

A delegation from both the MDP and JP had recently arrived in Sri Lanka in order to brief the various diplomatic missions in Colombo on the current political situation in the Indian Ocean archipelago.

However, the MDP’s delegation had not participated in the meeting with President Sirisena, the report said.

The JP leader is also scheduled to meet with other foreign ambassadors on Saturday.

Former Maldives president Mohamed Nasheed was arrested by police last Sunday on terror charges for having detained a top judge while in power.

On Thursday, the Sri Lankan government issuing a statement expressed its concern over the developing situation in Maldives following the arrest.

TAGS :  Maldives ,  Jumhooree Party ,  Maldivian Democratic Party ,  Qasim Ibrahim ,  Maithiripala Sirisena ,  Mohamed Nasheed ,
Disclaimer: All the comments will be moderated by the AD editorial. Abstain from posting comments that are obscene, defamatory or slanderous. Please avoid outside hyperlinks inside the comment and avoid typing all capitalized comments. Help us delete comments that do not follow these guidelines by flagging them(mouse over a comment and click the flag icon on the right side). Do use these forums to voice your opinions and create healthy discourse.