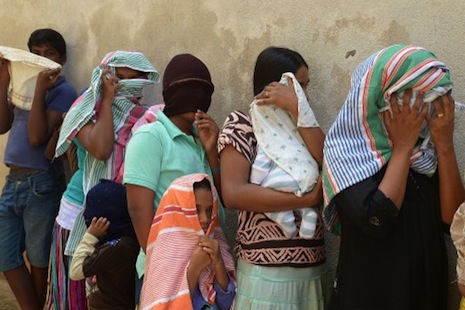 Medan immigration office head Purbanus Sinaga said on Saturday that illegal immigrants were arrested when entering the country through the Tanjung Balai in Asahan regency.

“They entered Indonesia using wooden boats and have paid a lot of money. They have been deceived by local middlemen and then stranded in the city,” he said as quoted by Antara news agency.

He added the Sri Lankans were being held in a special detention house for
illegal immigrants.

TAGS :  Sri Lanka ,  Medan ,  Indonesia ,
Disclaimer: All the comments will be moderated by the AD editorial. Abstain from posting comments that are obscene, defamatory or slanderous. Please avoid outside hyperlinks inside the comment and avoid typing all capitalized comments. Help us delete comments that do not follow these guidelines by flagging them(mouse over a comment and click the flag icon on the right side). Do use these forums to voice your opinions and create healthy discourse.