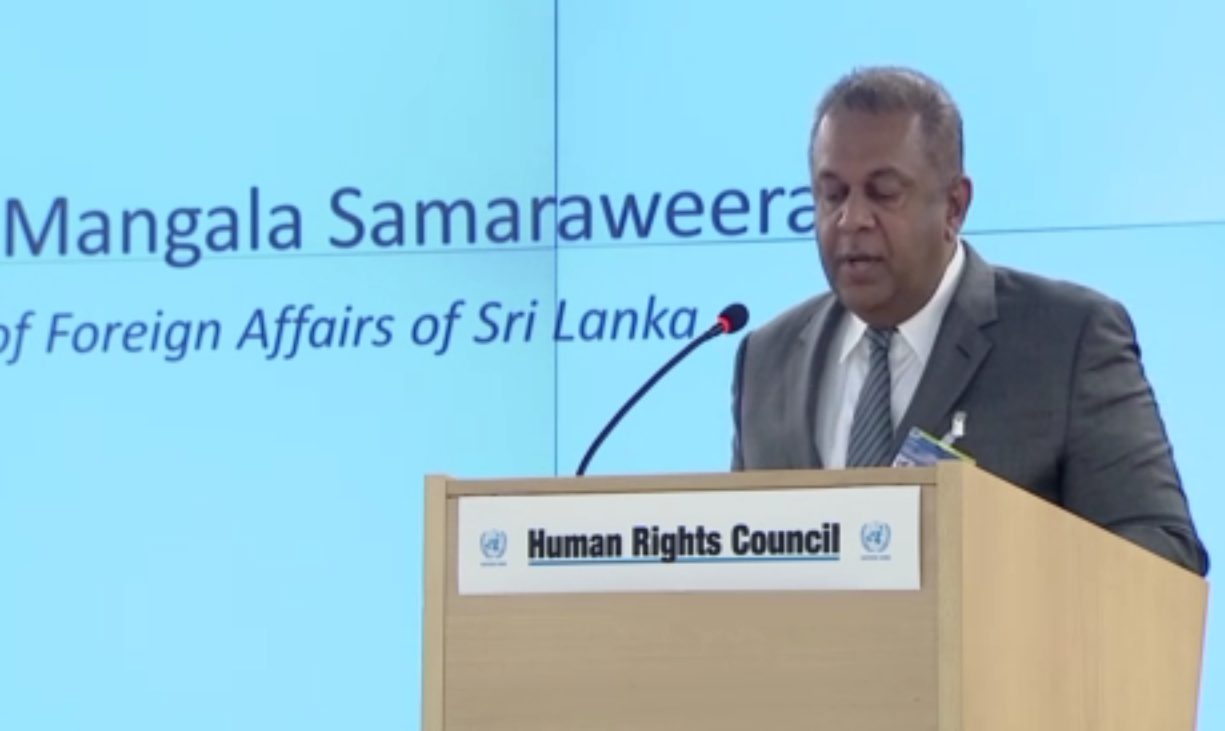 “With the previous government choosing to operate with a sense of impunity, opportunities for reconciliation and restoration of human rights suffered,” Foreign Minister Mangala Samaraweera said. The observation was made at the 28th Regular Session of Human Rights Council in Geneva, this afternoon.

“The historic election of 8 January this year that marked the end of that regime has now offered Sri Lanka an unprecedented opportunity to fulfill human right objectives and work on achieving reconciliation.

The previous government failed to implement the recommendations of the commissions that were setup at that time including that made up by the LLRC, action is now being taken to explore steps that be taken in this regard.  The contents of the report of the OHCHR investigation on Sri Lanka will be taken into account by domestic investigation and judicial mechanisms which we are in the process of setting up.

Over 81.52 per cent of the registered voters in all parts of the island nation including the former conflict affected areas in the Northern and Eastern provinces caste their votes. In fact, it is the largest ever voter turnout in the country’s history.

All communities united in electing President Maithripala Sirisena who promised them a united new Sri Lanka in which ethnic culture and linguistic diversity is respected, celebrated and valued. The people of Sri Lanka has chosen a President who would fulfill their needs, grant freedom of expression, rule of law, good governance and protection of human rights. In doing so, they have rejected outright a regime in which the rights of the individual had been violated with impunity for almost a decade.

Within days of being elected, the government carrying out its pledge to ensure media freedom; unblocked websites that were blocked, lifted restrictions placed on foreign media personnel, enable journalists to travel freely in all parts of the country, and invited all media personal living in exile to return back to their homes. Human rights activists, media personnel, and civil society groups are once again to engage in their work without any intimidation or harassment.

The government also made a declaration of peace paying respects to the citizens of the country of all ethnicities, and religions who lost their lives due to the tragic conflict that affected the country for over three decades. A commitment was made to ensure that never again the county will be allowed to traumatize by the shedding of blood of own citizens.” Said Minister Samaraweera.

TAGS :  Geneva ,  LLRC ,  UN ,  Regular Session of Human Rights Council ,  Mangala Samaraweera ,  domestic investigation ,  judicial mechanisms ,  OHCHR ,
Disclaimer: All the comments will be moderated by the AD editorial. Abstain from posting comments that are obscene, defamatory or slanderous. Please avoid outside hyperlinks inside the comment and avoid typing all capitalized comments. Help us delete comments that do not follow these guidelines by flagging them(mouse over a comment and click the flag icon on the right side). Do use these forums to voice your opinions and create healthy discourse.