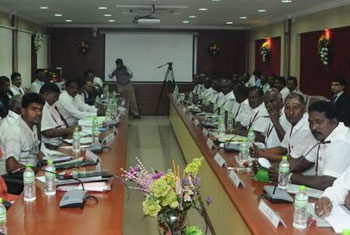 Representatives at the bilateral talks between Tamil Nadu and Sri Lanka fishermen, in Chennai in January 2014

Sri Lanka today accepted India’s request to revive talks between the fishing communities of the two countries, days ahead of Prime Minister Narendra Modi’s first visit to the country.

Indian High Commissioner to Sri Lanka Y K Sinha today met fisheries minister Joseph Michael Perera and asked for the revival of talks between the representatives of the fishing communities.

“In talks today the Indian High Commissioner requested that talks be started around 12th of this month ahead of Prime Minister Modi’s visit to Colombo”, Perera said. The Sri Lankan side asked the High Commissioner to meet with the northern chief minister C V Wigneswaran and religious leaders in the north, Perera added.

Sri Lankan fishermen have been complaining that since the advent of new government, the number of Indian fishermen breaching the country’s waters for illegal fishing have been increasing.

As many as 86 Indian fishermen were arrested and their 10 fishing boats seized by the Sri Lanka Navy for allegedly poaching in the country’s waters last month. The talks between Sri Lanka and India on the fishermen issue scheduled for March 5 have been postponed.

TAGS :  Lanka-India ,  Fishermen ,  Fishing ,  Indian Ocean ,   Palk Strait ,
Disclaimer: All the comments will be moderated by the AD editorial. Abstain from posting comments that are obscene, defamatory or slanderous. Please avoid outside hyperlinks inside the comment and avoid typing all capitalized comments. Help us delete comments that do not follow these guidelines by flagging them(mouse over a comment and click the flag icon on the right side). Do use these forums to voice your opinions and create healthy discourse.