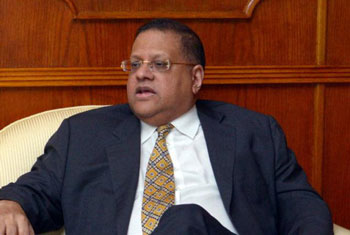 “We hope that these will be announced when the honourable [Indian] Prime Minister is here,” Arjuna Mahendran, Governor of Sri Lanka’s Central Bank, said in an interview to The Hindu on Tuesday. Mr. Modi will be in Sri Lanka between March 13 and 15 in the first official visit by an Indian Prime Minister since 1987.

Pointing to the manufacturing of tyres, two-wheelers and three-wheelers as potential areas of collaboration between the two countries, the Central Bank Governor — who had held top posts in private international banks — said they would bring “an immediate benefit to the Sri Lankan economy.”

Observing that Mr. Modi has “embraced Sri Lanka very warmly,” Mr. Mahendran, who assumed charge after the change in government here in January, said: “We are really looking forward to interacting with India now on a different basis, on a much more stable and constructive basis than what has occurred in the past. So, I hope this is really the start of a new era in our relationship.”

On whether there was a shift in the Sri Lanka government’s position on the Comprehensive Economic Partnership Agreement (CEPA) that New Delhi has been pushing since 2005 — the Rajapaksa government deemed it redundant — Mr. Mahendran said both the President and the Prime Minister saw huge potential for CEPA to be expanded into a full-fledged Free Trade Agreement.

India is Sri Lanka’s largest trade partner and bilateral trade between the countries stood at $4.6 billion in 2014.

On the likely concerns of the local business, he said “obviously there are sensitivities by local businessmen on whether they will have an even playing field with which to compete against their Indian competitors.”

However, he added, Sri Lankan industries were now nimble and well positioned to take on competition from Indian counterparts following the end of the war. “So, I am quite optimistic. I think a Free Trade Agreement with India is definitely very desirable for Sri Lanka, not only with India but also with China and the United States.” The countries however needed to be mindful of vulnerable areas such as agriculture, he added.

“We want to be in a situation where Sri Lankans and Indians can travel to each other’s countries, engage in business and do any sort of activity without any hindrance. It should be as if they are doing it in their own country.”

Such an environment, he said, would lead to greater economic activity, compared to the current situation where there were “many barriers to economic interactions.”

On the Central Bank’s position on bilateral aid, particularly from countries such as China, the Governor said while there was a “marked tilt towards China” earlier — reflected in the debt accumulated in Chinese banks — Sri Lanka would now go for a “healthy balance between sourcing projects from different countries.

The Central Bank and Sri Lanka’s Finance Ministry are in touch with Indian law enforcement agencies to track hidden assets or money transferred overseas by powerful figures in the administration of former President Mahinda Rajapaksa.

“The money that left Sri Lanka has probably gone to other destinations not necessarily to India, but to the extent that the Indian law enforcement authorities can help us to tap these international sources and find this money, we are definitely working with them very hard,” Mr. Mahendran said, the Hindu reports.

TAGS :  India ,  Central Bank ,  Arjuna Mahendran ,   Narendra Modi ,
Disclaimer: All the comments will be moderated by the AD editorial. Abstain from posting comments that are obscene, defamatory or slanderous. Please avoid outside hyperlinks inside the comment and avoid typing all capitalized comments. Help us delete comments that do not follow these guidelines by flagging them(mouse over a comment and click the flag icon on the right side). Do use these forums to voice your opinions and create healthy discourse.