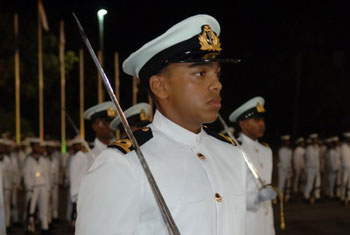 However on February 25 it was announced that Lieutenant Yoshitha Rajapaksa had been assigned to the security detail of his father.

The appointment was made with effect from February 12, sources told Ada Derana.

It had been previously reported that in the wake of his father’s defeat at the January 8 Presidential Election, Yoshisha Rajapaksa had requested to be allowed to join the security team assigned to the former President.

A former Captain of the Sri Lanka Navy rugby team who went on to captain the national rugby team, Yoshitha is the second son of Mahinda Rajapaksa and Shiranthi Rajapaksa.

In 2006, he joined the Sri Lanka Navy as a cadet officer and received his basic training at the Naval and Maritime Academy where he was promoted to Midshipmen and appointed aide-de-camp to his father the President.

Thereafter he proceeded to the Britannia Royal Naval College for his officer training and underwent training on board HMS Ocean during her deployment to the Caribbean and with the Fast Attack Flotilla.

In 2009, he was commissioned as an Acting Sub Lieutenant in Executive Branch of the Sri Lanka Navy.

On February 11, his brother MP Namal Rajapaksa said that his left the country on a private visit on approved leave from the Defence Ministry.

The Janatha Vimukthi Peramuna (JVP) has lodged a complaint with Defence Secretary B.M.U.D. Basnayake against Lt. Yoshitha Rajapaksa, alleging that the latter had been recruited to the Executive Division of the Navy, without meeting the required qualifications by passing the laid down procedures.

TAGS :  Yoshitha Rajapaksa ,  Mahinda Rajapaksa ,  Namal Rajapaksa ,  Sri Lanka Navy ,  B.M.U.D. Basnayake ,  JVP ,
Disclaimer: All the comments will be moderated by the AD editorial. Abstain from posting comments that are obscene, defamatory or slanderous. Please avoid outside hyperlinks inside the comment and avoid typing all capitalized comments. Help us delete comments that do not follow these guidelines by flagging them(mouse over a comment and click the flag icon on the right side). Do use these forums to voice your opinions and create healthy discourse.