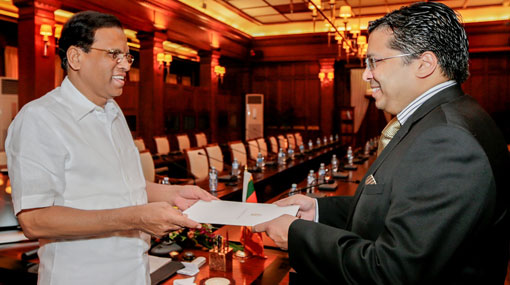 Former Sri Lankan High Commissioner to UK Dr Chris Nonis has been appointed as Adviser to the President on International Affairs, the President’s Media Division said.

Dr Nonis received his letter of appointment from President Maithripala Sirisena at the at the Presidential Secretariat this evening.

He carried out his postgraduate training at Royal Brompton, Hammersmith, and Addenbrooke’s, Cambridge and is a member of the Royal College of Physicians (UK).

He heads the Sri Lankan Advisory Board of the British Asian Trust, one of the charities of Prince Charles.

He has previously served on the Board of SriLankan Airlines; the Export Development Board of Sri Lanka; and the Country Coordinating Mechanism of Sri Lanka for the Global Fund. He is Chairman of Mackwoods Group of Companies.

TAGS :  Chris Nonis ,  Maithripala Sirisena ,  Sajin Vaas Gunawardena ,  UK ,
Disclaimer: All the comments will be moderated by the AD editorial. Abstain from posting comments that are obscene, defamatory or slanderous. Please avoid outside hyperlinks inside the comment and avoid typing all capitalized comments. Help us delete comments that do not follow these guidelines by flagging them(mouse over a comment and click the flag icon on the right side). Do use these forums to voice your opinions and create healthy discourse.