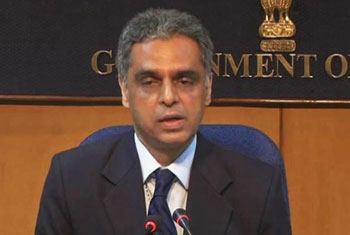 DMK urges Modi to ensure harsh comments are not made

Dravida Munnetra Kazhagam (DMK) leader TKS Elangovan on Saturday said that Indian Prime Minister Narendra Modi must discuss the fishermen issue with Sri Lanka and ensure that such harsh comments are not made from the other side in near future.

“Our Prime Minister going there must discuss this matter and see to it that such harsh comments are not made. It is his duty to protect our fishermen,” said Elangovan.

“The Prime Minister must understand and then hold discussions on these matters with the Government of Sri Lanka,” he added.

The Ministry of External Affairs (MEA) earlier in the day said External Affairs Minister Sushma Swaraj would raise the fishermen issue with her counterpart in Colombo as well as Sri Lankan Prime Minister Ranil Wickremasinghe, adding that this is a humanitarian and emotive issue which requires longer term solutions.

“The External Affairs Minister will certainly take up this matter today as part of her discussions, both with her Sri Lankan counterpart and with the Sri Lankan Prime Minister. The issue of Indian fishermen is an issue that India and Sri Lanka have discussed together on several occasions in the past,” MEA official spokesperson Syed Akbaruddin told ANI in Colombo.

“It is a humanitarian issue, an emotive issue and this is an issue of livelihood. This is an issue which requires longer term solutions. There are no quick-fix solutions to this. We intend to work with our Sri Lankan interlocutors to ensure that both India and Sri Lanka are able to work together on this matter,” he added.

The MEA spokesperson further said that both countries can work together in a peaceful and diplomatic manner on this issue.

Prime Minister Modi is expected to arrive in Sri Lanka on a two-day visit on March 13 and 14.

The Sri Lankan Prime Minister had earlier on Friday said that his government was willing to make a ‘reasonable deal’ with India with respect to the fishing rights, adding that the law creates provisions for a man to ‘shoot’ an intruder in his home.

“If someone tries to break into my house, I can shoot. If he gets killed...Law allows me to do that... On the fishermen issue, As far as I’m concerned, I have very very strong lines. These are our waters...Fishermen of Jaffna should be allowed to fish. We stopped them from fishing, which is why the Indian fishermen came in. They are willing to have a deal...Let’s have a reasonable deal... But not at the expense of the income of the Northern Fishermen,” Prime Minister Wickremasinghe said in an exclusive interview to Thanthi TV, a Chennai based news channel. - ANI

TAGS :  India ,  fishermen ,  Sushma Swaraj ,  Narendra Modi ,  Maithripala Sirisena ,  Ranil Wickramasinghe ,  Mangala Samaraweera ,
Disclaimer: All the comments will be moderated by the AD editorial. Abstain from posting comments that are obscene, defamatory or slanderous. Please avoid outside hyperlinks inside the comment and avoid typing all capitalized comments. Help us delete comments that do not follow these guidelines by flagging them(mouse over a comment and click the flag icon on the right side). Do use these forums to voice your opinions and create healthy discourse.