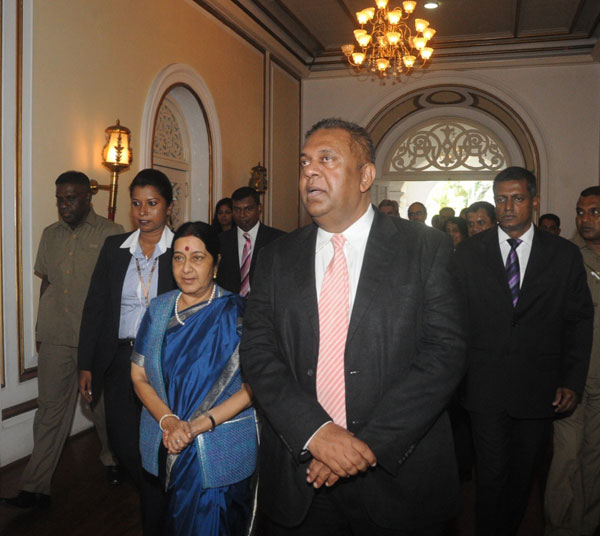 In addition to discussing agreements to be inked during Prime Minister Narendra Modi’s upcoming visit, the leaders discussed the possible resumption of ferry services in detail. India and Sri Lanka are very keen to resume the services at the earliest, Sri Lankan Foreign Ministry spokesman A.M.J. Sadiq told reporters after the bilateral meeting between the Ministers Friday morning.

The service between Colombo and Tuticorin was operational in 2011 but had to be suspended as it was not found to be commercially viable. The ferry service between Rameswaram and Thalaimannar came to a halt in the 1980s, during the war. “The piers at both sides have to be repaired before resumption of the service,” he said.

Mr. Samaraweera briefed the Indian delegeation on the political developments and the newly formed government’s progress on its 100 day programme, officials said. He also outlined the electoral reforms being considered by the government.

Minister Swaraj arrived on Thursday on a two-day visit and called on President Sirisena. Following her meeting with the Prime Minister, Ms. Swaraj is scheduled to meet senior leaders of various political parties representing the Tamil and Muslim minorities.

“During her visit, Minister Swaraj met with her Sri Lankan counterpart, Mangala Samaraweera and held an extensive and cordial discussion covering a wide range of areas relating to bilateral cooperation.”

The two Ministers agreed to convene the Ninth Session of the Joint Commission, headed by them in Colombo at an early date. The successful completion of the Commerce Secretary level talks held on 04 March 2015 in Colombo was also noted. During the visit, External Affairs Minister Smt. Swaraj called on President Mathripala Sirisena and was hosted to a luncheon by Prime Minister Ranil Wickremesinghe. Foreign Minister Samaraweera hosted a welcome dinner in honour of the visiting Minister and her delegation yesterday.

Associated with the Foreign Minister Samaraweera were Foreign Secretary Mrs. Chitranganee Wagiswara and senior officials of key line Ministries as well as officials of the Ministry of Foreign Affairs.

External Affairs Minister Swaraj had visited Sri Lanka previously as Minister of Telecommunications and as Leader of the Opposition of the Lok Sabha.

TAGS :  India ,  Sushma Swaraj ,  Narendra Modi ,  Maithripala Sirisena ,  Ranil Wickramasinghe ,  Mangala Samaraweera ,  ferry service ,
Disclaimer: All the comments will be moderated by the AD editorial. Abstain from posting comments that are obscene, defamatory or slanderous. Please avoid outside hyperlinks inside the comment and avoid typing all capitalized comments. Help us delete comments that do not follow these guidelines by flagging them(mouse over a comment and click the flag icon on the right side). Do use these forums to voice your opinions and create healthy discourse.