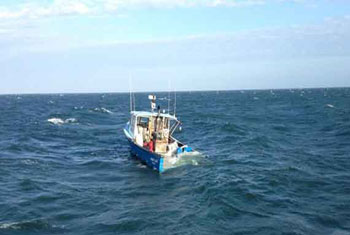 The Indian Coast Guard has detained six Sri Lankan fishermen on the charge of poaching in Indian waters, 128 nautical miles off Nagapattinam coast on Friday.

They were brought to Karaikal Marg port along with their mechanised boat. Later they were handed over to Indian Coastal Security Group for further investigation. – The Hindu

TAGS :  Sri Lankan fishermen ,  Indian Coast Guard ,  Nagapattinam ,
Disclaimer: All the comments will be moderated by the AD editorial. Abstain from posting comments that are obscene, defamatory or slanderous. Please avoid outside hyperlinks inside the comment and avoid typing all capitalized comments. Help us delete comments that do not follow these guidelines by flagging them(mouse over a comment and click the flag icon on the right side). Do use these forums to voice your opinions and create healthy discourse.