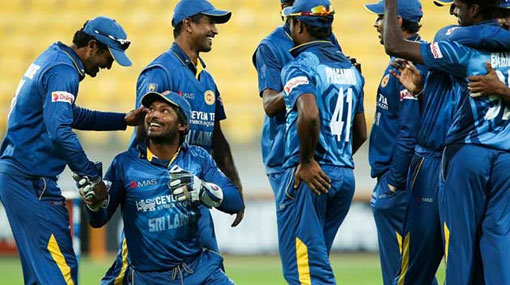 Kumar Sangakkara became the first batsman to hit four consecutive one-day centuries and set a new record for dismissals by a wicketkeeper as Sri Lanka defeated Scotland by 148 runs in the Cricket World Cup at Bellerive Oval on Wednesday.

Sangakkara made 124 off 95 balls and Tillakaratne Dilshan scored 104, the pair adding 195 for the second wicket as Sri Lanka made 363 for nine in the Pool A match.

Scotland were bowled out for 215 with Freddie Coleman making 70 and skipper Preston Mommsem hitting 60.

Nuwan Kulasekara picked up 3 wickets for 20 runs while Dushmantha Chameera finished with figures 3-51.

Sangakkara also set a new record for dismissals by a wicketkeeper moving past the 52 held by Australia’s Adam Gilchrist.

Sri Lanka have already made the quarter-finals while Scotland have lost all five games they have played.

Sri Lanka captain Angelo Mathews (51) also joined the party, clobbering six sixes in his 21-ball blitz in the frantic final phase of the innings when ropes were cleared and wickets tumbled regularly.

Sangakkara (124), who went into the match as the highest run-getter at this year’s tournament, reached the 100-mark in 86 balls and went on to consolidate his position at the top of the batting table with another scintillating knock.

TAGS :  ICC 2015 Cricket World Cup ,  Kumar Sangakkara ,  Tillakaratne Dilshan ,  MCG ,  Bangladesh ,  Dushmantha Chameera ,  Nuwan Kulasekara ,  Hobart ,  Sri Lanka Cricket ,  Bellerive Oval ,
Disclaimer: All the comments will be moderated by the AD editorial. Abstain from posting comments that are obscene, defamatory or slanderous. Please avoid outside hyperlinks inside the comment and avoid typing all capitalized comments. Help us delete comments that do not follow these guidelines by flagging them(mouse over a comment and click the flag icon on the right side). Do use these forums to voice your opinions and create healthy discourse.