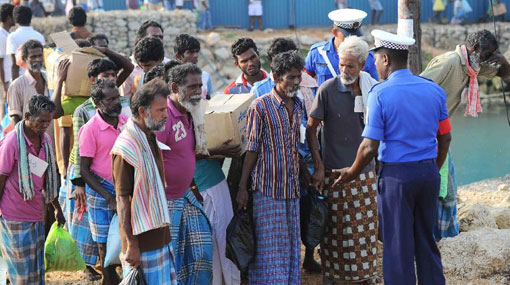 India, Sri Lanka to release fishermen ahead of Modis visit

President Maithripala Sirisena has ordered the release of 86 Indian fishermen in Sri Lankan custody as a goodwill gesture ahead of Prime Minister Narendra Modi’s visit to the island.

A statement from the office of President Sirisena pointed to a likely reciprocal gesture from India. India is to release 22 Sri Lankan fishermen and their boats.

The Sri Lankan Navy on February 26 arrested the Indian fishermen off Mullativu on charges of poaching in Sri Lanka’s territorial waters. Ten trawlers in their possession were seized and remain in Sri Lankan custody.

The issue of Indian trawlers allegedly poaching in Sri Lankan waters figured in the talks between President Sirisena and PM Modi in New Delhi, when the Sri Lankan President visited India last month.

Mr. Modi had then emphasised the need for resuming talks between fishermen of both countries. The talks are likely to be held in Chennai soon after Mr. Modi’s two-day visit to Sri Lanka on Friday and Saturday, according to Foreign Ministry officials.

Meanwhile, fisher leaders in Sri Lanka’s war-torn Northern Province – whose livelihoods have been badly hit by trawlers poaching in their waters – have sought an appointment with Prime Minister Narendra Modi, to present their concerns.

The Tamil National Alliance (TNA) had conveyed this to Foreign Minister Sushma Swaraj who was in Colombo last week.

TAGS :  India ,  Sushma Swaraj ,  Narendra Modi ,  Maithripala Sirisena ,  fishermen ,  Mullativu ,
Disclaimer: All the comments will be moderated by the AD editorial. Abstain from posting comments that are obscene, defamatory or slanderous. Please avoid outside hyperlinks inside the comment and avoid typing all capitalized comments. Help us delete comments that do not follow these guidelines by flagging them(mouse over a comment and click the flag icon on the right side). Do use these forums to voice your opinions and create healthy discourse.