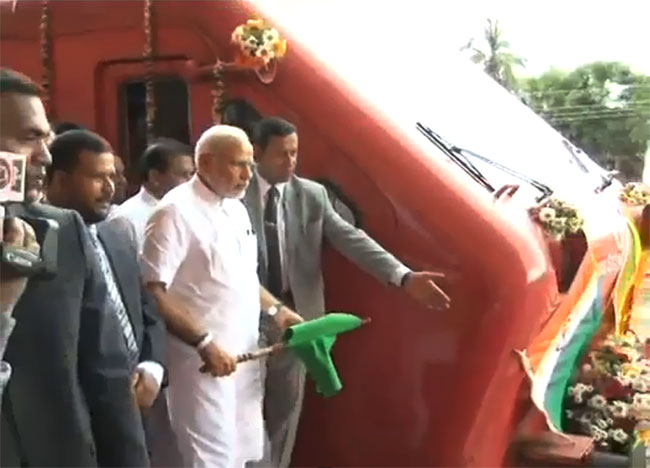 Prime Minister Narendra Modi today flagged off a train service at the north-western Sri Lankan town of Talaimannar – the closest point to India – restored after decades of civil war, completing the reconstruction of the entire Northern Province Railway Line.

He is on his way to Jaffna, a former war zone in the island’s Tamil-majority Northern Province.

The newly-constructed 63-km railway track between Madhu Road and Talaimannar Pier is the last segment of the 265-km long, prestigious Northern Railway Line Reconstruction Project which is being executed by IRCON International Ltd., a Government of India owned company.

It is designed with a speed potential of 120 km per hour. The completion of the rail projects in the northern region is a big step towards providing safe, time and fuel efficient, comfortable and environment friendly transport service to the people of Sri Lanka, PTI reported.

Sri Lankan officials said that after commissioning of the new section, the commitment of the Government of Sri Lanka to restore rail track connectivity in the Northern Province after a lapse of 25 years has been fulfilled.

This will also fulfill the long-cherished dream of the local Tamil people for having direct rail connectivity to Colombo that will also help in the reconciliation efforts of Government of Sri Lanka, they said.

TAGS :  Talaimannar ,  Medawachchiya ,  Narendra Modi ,  IRCON ,  Anuradhapura ,  Mahabodhi Tree ,  Jaffna ,
Disclaimer: All the comments will be moderated by the AD editorial. Abstain from posting comments that are obscene, defamatory or slanderous. Please avoid outside hyperlinks inside the comment and avoid typing all capitalized comments. Help us delete comments that do not follow these guidelines by flagging them(mouse over a comment and click the flag icon on the right side). Do use these forums to voice your opinions and create healthy discourse.