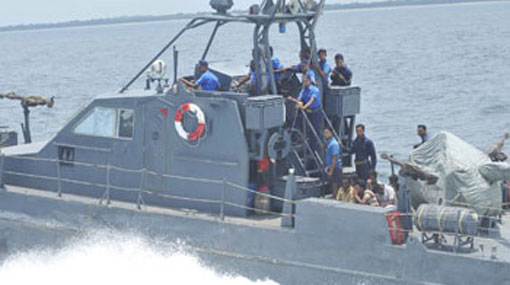 Sri Lanka Navy on Sunday (15) “totally denied” allegations that a naval troop of attacking a group of Indian fishermen off Katchatheevu sea.

However, several Indian news agencies alleged that naval personnel had allegedly attacked some five fishermen when they were fishing near Katchatheevu on Saturday (14) afternoon.

“The navy personnel, who came in five boats, fired four rounds in the air and threatened a group of fishermen from here not to fish in the area. They also attacked five fishermen of a boat with steel rods, Kennedy, Inspector, ‘Q’ branch police and T. Sasuraja, President, Rameswaram Fishermen Association, told reporters. The navy men also destroyed some of the fishing nets, they said. Kani and Kalainaanam sustained severe injuries in the attack and they were admitted to hospital, they said,” the India Today news agency said.

TAGS :  fishermen ,  Navy ,  India ,  modi ,  Katchatheevu ,
Disclaimer: All the comments will be moderated by the AD editorial. Abstain from posting comments that are obscene, defamatory or slanderous. Please avoid outside hyperlinks inside the comment and avoid typing all capitalized comments. Help us delete comments that do not follow these guidelines by flagging them(mouse over a comment and click the flag icon on the right side). Do use these forums to voice your opinions and create healthy discourse.