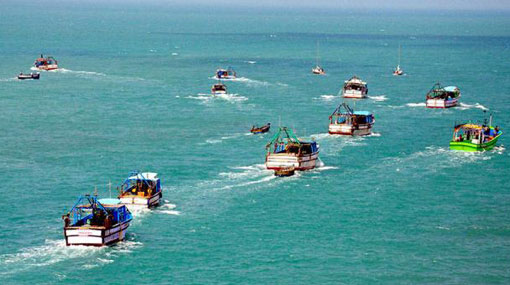 Fishermen to leave for Sri Lanka to bring back 87 boats

A group of Tamil Nadu fishermen accompanied by technicians will leave for Sri Lanka to repair and take back their 87 boats; these boats were released by Sri Lanka ahead of Prime Minister Narendra Modi’s visit as a goodwill gesture.

A senior official in the fisheries department of Sri Lanka said that the salvage operation is expected to take a few days and the boats are likely to be towed back by the fishermen later this week.

The boats were released by Sri Lanka ahead of Prime Minister Narendra Modi’s visit as a goodwill gesture. The fishermen of these boats have already been released.

Meanwhile, 43 of the 86 fishermen released on the eve of Prime Minister Modi’s visit on orders of President Maithripala, returned home from Trincomalee on Saturday.

Sri Lankan Navy handed them over to the Indian Coast Guard at the maritime boundary. However, 10 boats of the recently arrested 86 fishermen have not been released. (DDI News)

TAGS :  fishermen ,  Navy ,  India ,  Jaffna ,
Disclaimer: All the comments will be moderated by the AD editorial. Abstain from posting comments that are obscene, defamatory or slanderous. Please avoid outside hyperlinks inside the comment and avoid typing all capitalized comments. Help us delete comments that do not follow these guidelines by flagging them(mouse over a comment and click the flag icon on the right side). Do use these forums to voice your opinions and create healthy discourse.