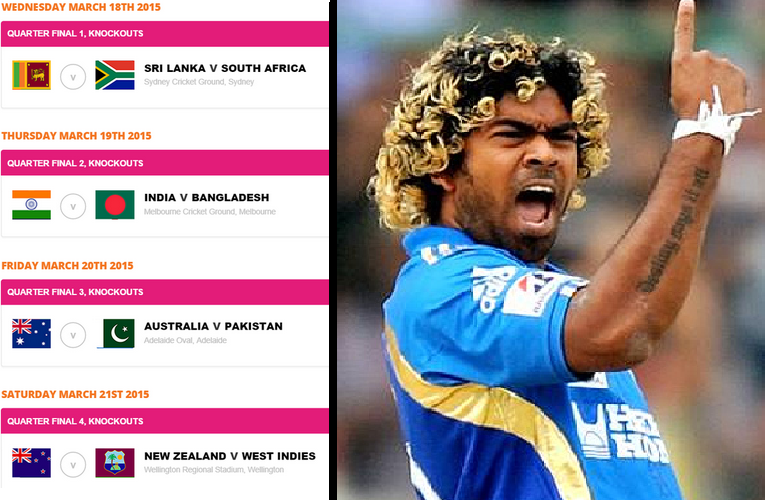 The quarter-finals line-up in the ICC Cricket World Cup 2015 was confirmed on Sunday after the West Indies defeated the UAE in Napier and Pakistan beat Ireland in Adelaide on the last day of the pool stage matches.

As such, Sri Lanka will go head to head with South Africa in the first quarter-final in Sydney on 18 March, while defending champion India will square off against Bangladesh in Melbourne on 19 March.

Four-time former champion Australia will take on 1992 winner Pakistan in the third quarter-final on 20 March in Adelaide and the last quarter-final will be between New Zealand and the West Indies in Wellington on 21 March.

The schedule of the knock-out matches is:

A reserve day has been scheduled for each of the seven knock-out matches.

If a quarter-final or semi-final is tied, abandoned or if the match is a no-result, then the team that finished in the higher position in the Pool stage shall progress, the ICC reported.

TAGS :  SLC ,  ICC ,
Disclaimer: All the comments will be moderated by the AD editorial. Abstain from posting comments that are obscene, defamatory or slanderous. Please avoid outside hyperlinks inside the comment and avoid typing all capitalized comments. Help us delete comments that do not follow these guidelines by flagging them(mouse over a comment and click the flag icon on the right side). Do use these forums to voice your opinions and create healthy discourse.