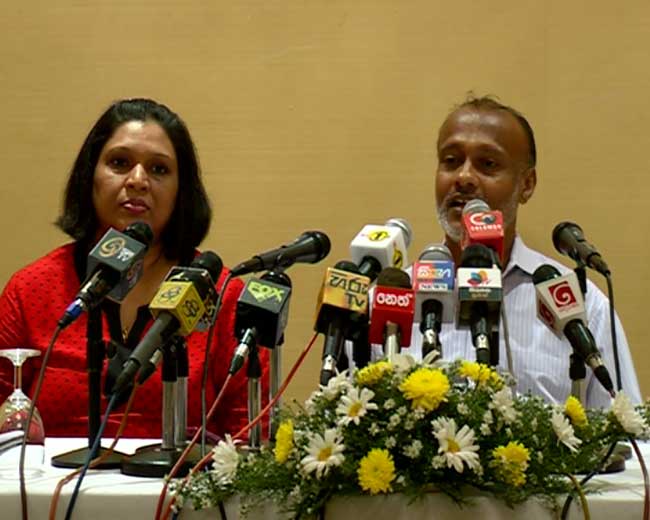 A mother and a father on Sunday (15) accused that a son of a powerful minister has abducted their underage daughter and they neither know her whereabouts ever since nor whether their child is dead or alive.

Gamini Ranasinghe, whose daughter was alleged to have abducted by Eksath Senaratne, a son of Minister and Cabinet Spokesperson, Rajitha Senaratne, made the controversial observation at a press conference held in Colombo.

Ranasinghe added that his daughter who at the time was preparing for the London Ordinary Level examination was abducted on 14 February, 2014.

“One may ask, what took it so long to reveal this. But Rajitha is a powerful politician. We eventually had to step forward as justice was not served.

Both Rajitha and her wife are aware of this since Eksath Senaratne is keeping my underage daughter at their official residence in Colombo. We are not allowed to enter it. However, the National Child Protection Authority (NCPA) interfered and we got our child back” Ranasinghe said.

Indira Rodrigo, mother of the abducted teenage, said her daughter was yet again abducted by the Minister’s son on 6 April, 2014.

However, Minister Senaratne denied allegations and said “We predicted this would happen. There is a mudslinging campaign against me after all I did to topple the former government. They could go to courts, but instead they held a press conference.”

Police Spokesman ASP Ruwan Gunasekara said the preliminary investigations have suggested that the girl was over 16 years old at the time of the abduction.

TAGS :  Gamini Ranasinghe ,  Indira Rodrigo ,  Rajitha Senaratne ,  Eksath Senaratne ,
Disclaimer: All the comments will be moderated by the AD editorial. Abstain from posting comments that are obscene, defamatory or slanderous. Please avoid outside hyperlinks inside the comment and avoid typing all capitalized comments. Help us delete comments that do not follow these guidelines by flagging them(mouse over a comment and click the flag icon on the right side). Do use these forums to voice your opinions and create healthy discourse.